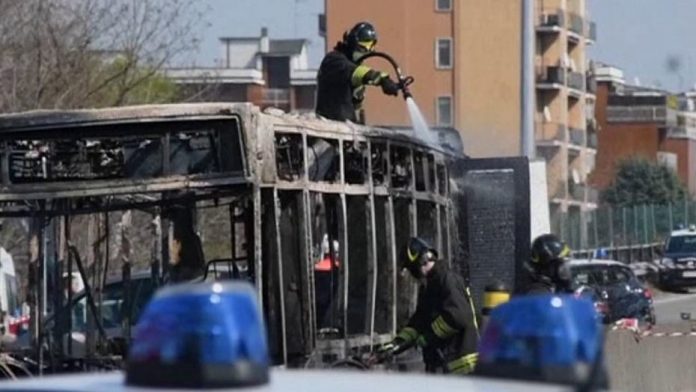 A 13-year-old boy who saved his classmates from a bus that was hijacked will receive the Italian citizenship, Deputy Prime Minister Matteo Salvini has announced. Ramy Shehata, who was one of the 51 students on the school bus, made a call and gave the exact location of the vehicle before it was set on fire by the driver.

Ramy and the 50 other students were rescued by authorities before the driver set the bus on fire. The bus was on its way to the school after a gym session but the driver decided to take a much different route. Authorities said he was instead driving to an airport in the city.

Officials had previously revealed that the boy would receive citizenship over his heroic act. At the time of the incident, the driver requested for the students to hand over their smartphones. Reports say Ramy told the driver that he forgot his phone.

Authorities were contacted and arrived to the scene to break the windows of the bus and get the students out. Ramy was previously said to be from Egypt but reports now say that he was born in Italy but was never issued documents from the country. Italian law states that children born to immigrant parents cannot apply for citizenship until they are 18.

Ramy’s father arrived to Italy from Egypt back in 2001. The boy was told he would receive citizenship last week. At the time, it was reported that the expenses would be covered and that the process would be quicker for him.

The Ansa news agency reported that Ramy pretended to pray in Arabic during the incident. But he was instead contacting his father. Authorities were called and were able to get there in time.

The driver arrested by authorities is 47-year-old Ousseynou Sy. The man is said to be from Senegal but is also an Italian citizen. Reports have said that the government is looking to remove the citizenship from him with a security decree that was approved last year.

No one was injured in the incident but authorities are now investigating the man, who reports say has antecedents. A teacher and authorities have confirmed that the man made comments involving the situation in the Mediterranean, where many have lost their lives trying to reach Europe.

Alberto Nobili, head of the counter-terrorism office in Milan, has said that the man has not linked himself to any groups. He told reporters that the man had said that it was his  personal choice and that he could no longer see children torn apart by sharks in the Mediterranean.

Mr. Salvini’s office is now considering revoking his Italian citizenship. The man was recently taken to San Vittore Prison but was later moved to Paullese over the hostile reception.