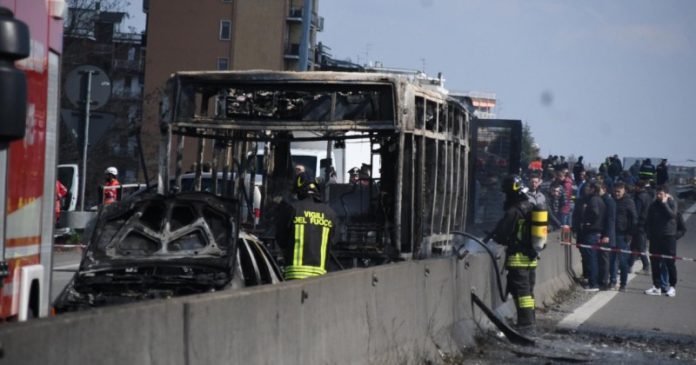 A man who hijacked a school bus with 51 students before setting it on fire acted as a lone wolf, according to Alberto Nobili, head of the counter-terrorism in Milan. The official also confirmed that the driver had no links with terrorism.

47-year-old Ousseynou Sy, a man from Senegal with Italian citizenship, set the bus on fire but the students were able to get out in time. Some of the students were hospitalized but reports said no one was seriously injured in the incident.

A tweet by police said that the driver had been arrested and that he had taken 51 students. The tweet adds that he was stopped after ramming three police cars and that during the descent of the students from the bus, he set the bus on fire.

Videos taken after the incident showed the bus completely destroyed by the fire. The vehicle was set on fire on one side of the road. The man allegedly uploaded a video on YouTube explaining his actions.

Italy’s Ministry of Defence posted a tweet thanking authorities for rescuing the children. Italy’s Deputy Prime Minister Matteo Salvini said after the incident that police were searching the driver’s house. He also said he wanted to know why the man was allowed to drive a school bus with his antecedents. The man was allegedly charged with sexual harassment and drunk driving. The minister also explained that there was a possibility that his citizenship could be taken away if he is convicted of terror. The removal of his citizenship would be done under a security decree introduced by the country in 2018.

A police spokesman confirmed to CNN that no one had been injured in the incident. The spokesman revealed that the students were able to get out through the back windows broken by police.

The student who contacted police has been identified as Ramy Shehata. Matteo Salvini’s office has confirmed that Shehata, who is from Egypt, will receive citizenship. The statement from the office said that the Interior Ministry is ready to take on the expenses and speed up the process for his citizenship. Police told CNN that his call and actions were essential for the rescue. He was able to give them the exact location of the bus while hiding from the driver.