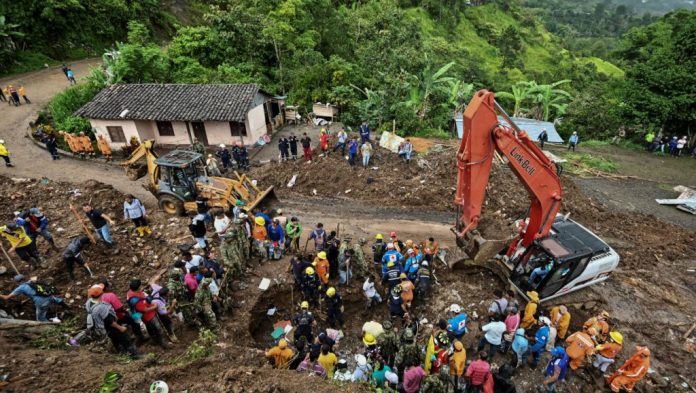 Emergency teams have found 11 bodies from the landslide that hit the town of Rosas on Sunday. The discovery increases the death toll to 28 people. Two more people are still missing.

The tragedy comes during Colombia’s rainy season. Landslides such as the one in Rosas are common in the country since there are towns built on steep hillsides and areas that are not completely stable.

The landslide buried several homes and left destruction across the town. The mayor of the town Jesus Eduardo Diaz said he was concerned about the other homes in the area since there might be more rains.

The landslide swept through the town during the early hours of Sunday. At least eight homes were buried by the mud. Colombian President Ivan Duque visited the area yesterday and explained that a geological fault line which crosses the town had contributed with the disaster.

The president said his government would help those affected by the disaster. They have promised to build 56 homes in the town. Local officials and residents have been involved in disputes over the dangers that the town was facing.

Mr. Diaz said the area was in high risk of mudslides and that residents had been warned a year ago about the danger. The warning also came with a relocation offer for the residents but nothing was done.

The mayor explained that the relocation offer was a temporary shelter located 35 minutes away. He said residents decided to stay in the town. Many of them were waiting for new homes to be built in the town.

Residents were not happy that a plan to build close to 100 new homes in the town was paused. The plan was brought up after the rainy season of 2010-2011, which saw a few areas affected by mudslides.

The contract to build the new homes was suspended late last year after the construction company was accused of not attempting to complete the work. The ministry of housing has now promised 56 homes, which is 36 homes less than what was planned with the contract.

The disaster is one of the deadliest since the landslide in the city of Mocoa back in April 2017. That landslide was caused by heavy rains, which swept away parts of the city. Mocoa, a city with a population of about 40,000 people, was struck by the landslide at a time when many of its residents were still sleeping.

The disaster, which left most of the city without electricity and water, is considered one of the worst in recent years. More than 290 people lost their lives and hundreds were left without homes. The disaster also left 332 people injured and 70 missing.

Just a few days later, authorities opened investigations into the disaster. The investigations were opened to see if the structures were prepared for this type of natural disaster and if the regulations were enforced during construction of the buildings.

Authorities were reportedly warned about the threat of mudslides since the city is located close to areas where heavy rains could bring down mud. The landslide covered several homes and parts of the city.

Many residents were caught by surprise since it happened during the early hours of Saturday. Reuters recently reported that two years after the disaster, local authorities are still struggling to get the funds needed to resettle the population that is living in high risk areas.