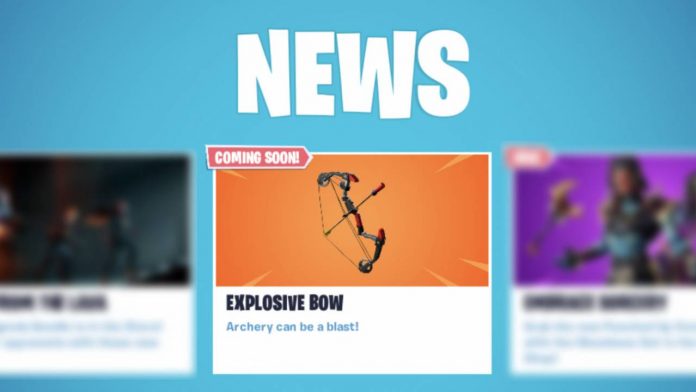 Fortnite’s new update is out now but there are no major changes to celebrate for those who were waiting for the return of the extra health/shield on eliminations. The patch brings the Boom Bow, a weapon that was announced through the News Section a few days back.

The new weapon uses shotgun shells and it deals damage if the player is spot on and hits the opponent. The shots also make a small explosion, which means players can do some serious damage if they are accurate. The damage of the shot can be between 18 to 54 while the explosion deals 54 damage by itself. There is also a 4x headshot multiplier.

The update’s big addition is the weapon but there is nothing else besides that. Epic seems to be sticking to the changes that were made with the v8.20 update. In that update, the game brought back the 999 material limit and removed the ability to receive 50 health or shield from an elimination.

The change from the update has brought tons of complaints from the community. Popular streamers have been very critical of the recent changes, which were how the game was originally.

What Has Changed Since The Last Update?

Before the controversial update, players could gather material faster and receive the health or shield for an elimination. Materials were limited to 500 but players could pick up a lot from eliminated opponents.

This had been introduced a few weeks back but many players seemed to like the changes. Epic has introduced an Arena Mode where players have the settings that were featured before the v8.20 update. The only problem with that is that the game mode is only for Solo or Duos, which means that Squads cannot enter.

Ninja has been one of the many that have spoken against the new changes, even saying that this makes Squads boring now since it is not part of the selection that has the previous settings.

Many players have asked Epic to revert the changes but the game developer appears to be sticking to the original settings for now. Here are the other small additions and changes from the patch:

The Sniper Shootout LTM is back in the lineup. As most of you know by now, this limited time mode only features sniper rifles.

Fortnite often rotates its LTMs so this mode will likely be available for a few days, maybe until the next update.

What do you think about the new patch? Do you want the game to revert? Let us know in the comments.