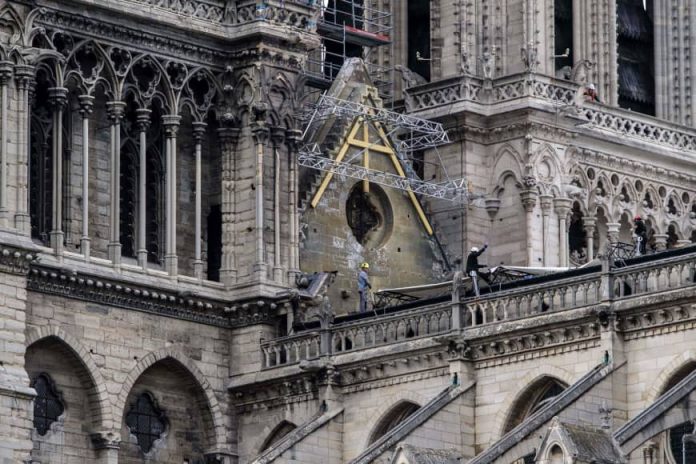 Climbers have been brought in by the French government to place a protective cover over Notre Dame. The cover is being placed to protect the cathedral from damage by the rain. The building was heavily damaged by a fire a few days ago.

The cathedral suffered damage during the fire on April 15, which went on for hours. The fire caused the spire to collapse and destroyed most of the roof. The building, which is in fragile condition, is now being protected by authorities.

The rain is a new challenge for experts since the structure is missing most of its roof. Several days of rain were forecast so climbers had to be brought in to prevent the water from damaging the structure even more.

The cathedral was partially saved after efforts from emergency teams. The building will still have to be rebuilt since part of its roof and spire collapsed. Leaving the building exposed to the rain could cause further damage to the structure, according to experts.

Climbers are now rushing to have the protective cover over the exposed areas. The cover will only be temporary as experts have another idea for the structure. They plan on having a bigger cover that will protect all of the structure.

Rain is expected to hit the area on Thursday so the climbers only have a few hours to complete the work. The site’s chief architect, Philippe Villeneuve, spoke to BFMTV and said that he wanted to speed up the efforts to have the cover before the rain hits. He confirmed that the beams were in place, the tarpaulins had arrived and that the climbers were ready.

He said the priority now is to protect the structure from the rain, which is expected to get worse late Thursday. Christophe Villemain, an expert in building restoration, told BFMTV that the rain could cause other parts of the roof to collapse.

The plans are to have the much bigger cover in the near future but first the temporary protective cover has to be placed so that the rain does not cause further damage. The expert explained that before the bigger cover can be placed, scaffolding that was being used during the renovation work before the fire has to be taken out. He said that will likely take close to a month.

The fire made news around the world since the structure is one of the most famous cathedrals. The French government is already planning to rebuild the structure and reports say that more than one billion dollars have already been raised to rebuild it.

Restoration help could come from many things, including the video game Assassin’s Creed Unity, which was recreated by artist Caroline Miousse. She spent years working on the cathedral featured in the game and it is so accurate that it is believed that the representation could help experts.

Ubisoft, the company behind the game, recently made the game free for PC players. The announcement has brought tons of praise for the game developer. AC Unity saw mixed reviews during its release but many have now flooded review sites to comment on the company’s announcement. Ubisoft has also announced that it will donate over $550,000 to help in the rebuilding process.