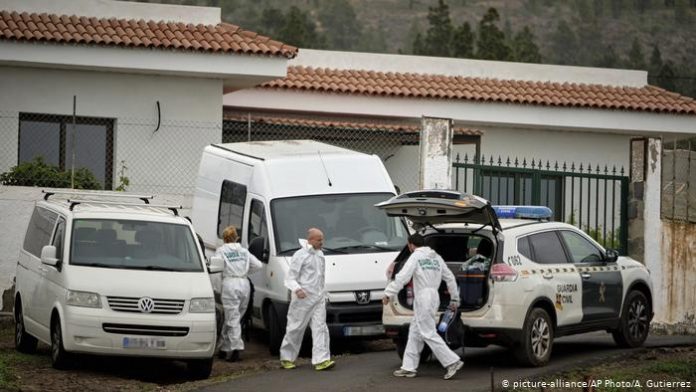 Spanish authorities believe that the man behind the Tenerife cave murders planned the crime well. The German man, who lives in the island, is suspected of killing his partner and eldest son.

The murders happened at a cave in Tenerife, which is a popular tourist destination in Spain. The remote cave is located near the town of Adeje, which is home to a popular resort and several beaches. The man’s youngest son told residents that found him that he had escaped from the cave.

The boy later helped authorities and volunteers find the cave. The search took time but authorities found the two bodies. They found injuries consistent with an assault. The man has denied knowing that the two were dead.

Authorities posted a statement on Facebook, saying in Spanish that the indications are that he planned the crime and that if it not had been for the boy, they wouldn’t have found out about it, or found out God knows when.

Residents found the boy wandering near the mountains on Tuesday. A Dutch woman with the name Annelies helped translate for the boy. He told people that his father had hired a vehicle and taken the family to a picnic.

El Pais reported that the woman has been taking care of the boy since he was found on Tuesday. He does not know that his brother and mother were killed. Police believe the man was behind the murders and he was arrested at his apartment located in Adeje.

Reports say that authorities fought with the suspect when they showed up to arrest him. He denied knowing about the death of the two. He is being held by police at a nearby town. The little boy was quoted by Spanish media as saying that his father drove them to the mountains and parked the van close to the cave. He claimed to have hidden Easter gifts in the cave.

Spanish ABC news reported that the boy said he saw his father assaulting his mother. He also said he saw her lying on the ground and bleeding. The boy is with the woman but reports say that his grandparents, who are from Germany, are on the way.

Police continue their investigation and recently seized the van that was hired by the man. They have confirmed that he was living in an apartment, where he was arrested shortly after the crime was reported.

Adeje’s Mayor said that everything indicates that the crime was planned. The boy’s description helped authorities find the exact location and the bodies. He was first found by a woman called Rosi, who said that the boy was tired. The Dutch woman was later contacted and she helped interpret what he was saying.

Tenerife, an island with a population of about 920,000 people, is a popular tourist destination among people from the UK and Germany. The area is home to many resorts as well as places to visit. Estimates say the island has Germany as the second highest visitors behind the UK.