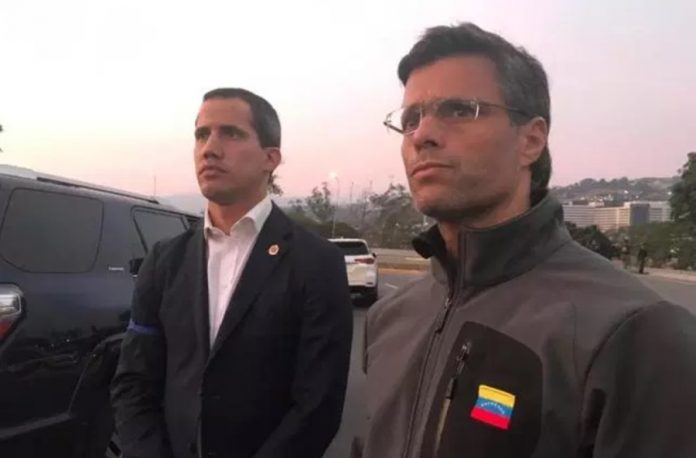 US officials have revealed that some members of Nicolas Maduro’s circle agreed with the opposition that he had to go. The members later backtracked but the battle for power continues as Juan Guaido and Leopoldo Lopez have called for the population to take the streets.

The news come shortly after Juan Guaido made an appearance with several members of the military. He was joined by Leopoldo Lopez, who was under house arrest. The appearance was made close to an important air base in the capital Caracas.

US Secretary of State Mike Pompeo recently said during an interview with CNN that Maduro was ready to leave the country this morning but was told to stay by Russia. Mr. Pompeo offered no evidence.

The news of Juan Guaido appearing with members of the military quickly spread around the country, despite the reports of radios and channels remaining silent. Thousands of Venezuelans later took the streets to show support for the military, which is now divided.

Part of the military appears to be loyal to Maduro, who has not made any live appearances since the situation began earlier today. Videos taken near the La Carlota air base showed the military supporting Juan Guaido and firing back at Maduro supporters inside.

Reports say at least 71 people have been injured during the clashes. In one incident, a military armored vehicle drove into several protesters. It is not clear how many people were injured in that incident but a group is seen carrying one person.

Maduro and supporters claim that it is a small group of traitors that began the coup attempt. The former president has not been seen in public since the clashes began earlier today.

US National Security Adviser John Bolton alleged that Venezuela’s Defence Minister Vladimir Padrino Lopez was one of the men involved in the talks with the opposition. He recently appeared on television showing support for Maduro.

Mr. Bolton told reporters that they all agreed that he had to go. He offered no evidence but Elliott Abrams, the US envoy for the South American nation, also made similar comments on the negotiation.

Mr. Maduro has refused to step away and continues to claim that he is the president since he won an election last year. The election was heavily criticized since it took place without most of the opposition, who have been jailed or forced to flee the country.

Leopoldo Lopez, who was under house arrest, appeared with Mr. Guaido earlier today. Mr. Lopez is believed to be a favorite for a future election. He was jailed by the government a few years back over the protests that took place that year.

Mr. Guaido declared earlier today that this was the final phase of the process to remove Maduro from power. He appears to have some support from the military but others have refused to follow orders. Videos taken from outside the air base show military clashing with what is believed to be other members of the military.

In a different video, police are seen firing back at a group of colectivos, a group of people that are paid and armed by Maduro and officials. It is unclear what happened after the clashes between authorities and the group of armed men.