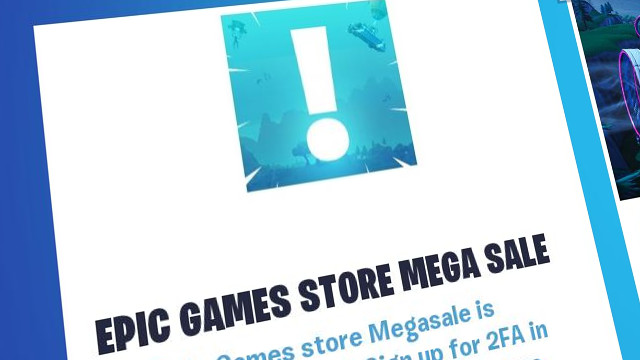 Epic Games has accidentally leaked a small reward for those who visit their website and enable more security options for their accounts. The game developer’s plans were spotted on Monday when Fortnite players logged in.

Fortnite has a News Section that pops up whenever there is a new item in the shop or news on the game. Many players spotted the message on the News Section and took social media to ask what the reward was about.

The message mentions that there is a $10 credit for those who secure their accounts with two-factor authentication. The credit is for the Epic Games Store, which launched late last year.

The message was later removed from the News Section, making it seem like it was an accidental release by the company. Epic Games posted a tweet late Monday confirming that a message of the day had snuck out about a sale. The tweet adds that there is a sale in the works but it hasn’t launched yet.

Epic Games did not confirm if the reward will be available for those who already enabled the security options last year. It also didn’t reveal a date on the start of the sale. Epic Games has been quite generous over the last few seasons of Fortnite. Last year, the game developer actually gave out a free emote, the Boogie Down, for those who enabled this option.

Fortnite is an extremely popular battle royale game but it has become the target of hacks and scams. Fortnite scammers use a number of ways to get a player’s financial information or their account. Epic Games has been doing everything it can to convince the players to add more security to their accounts.

Epic Games is not shy of doing giveaways and player rewards whenever there is an issue or idea to add more security. During the end of Season 7, the company actually gave out free Battle Passes for those who completed a number of challenges in time. The Battle Pass, which costs around $10, allowed players to play Season 8 completely for free.

A few days back, the company also gave out a free glider for those who experienced issues or were part of the Unvaulting event, which took place just a few days before the launch of Season 9. The glider, which has a price of 1,200 V-Bucks in the item shop, was given out for free and those who already had it before the issue were returned their V-Bucks.

Epic launched its store back in December 2018. The game developer has since been working on new releases and exclusives. Epic recently acquired the makers of Rocket League and announced that the game will be available there in late 2019. The game developer also has a deal with Ubisoft that brings its games to the store.

We don’t know when the incentive will be launched but it sounds like players who have the option or decide to enable it will receive $10 credit to spend. We’ll keep you updated when there is more info.