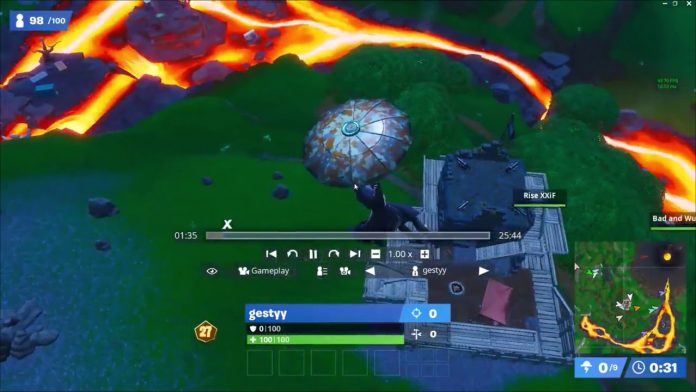 The Fortnite competitive scene has been talking a lot about the allegations against Rise XXiF after footage revealed some suspicious activity between him and two other players. Epic Games, which had been following the case, determined that the player and the two others did cheat.

Just a few days ago, footage showed him and two other players not really battling. The footage, which was posted on Twitter by RBK HighSky, shows him dropping at one of the pirate camps near the volcano. There is no problem there since pirate camps are a decent landing spot for those who want to grab some weapons and shield.

The pro player is followed by two others, something that is common when landing in this area. He lands at the pirate camp, finds a weapon and a slurp juice. The suspicious activity begins when he turns to the outside of the pirate camp and sees one of the players just gathering some wood at one of the stairs.

He fires at the player gathering wood and he jumps to get away from him. The suspicious activity continues as the player runs past a purple shotgun and does not open the chest next to it. The player does grab the purple pump shotgun after that but he is immediately eliminated.

The player eliminated happens to have 31 points, meaning he is unlikely to qualify at this point. But the suspicious activity continues as there is a second player landing right after the first one is eliminated.

The second player goes for the chest that the first one skips but he begins making some questionable moves. He crouches when opening the chest and decides not to grab the materials that the first player has dropped.

He does have time to fire back with a suppressed SMG but shoots just a few bullets, which end up hitting the brick that the pro player is sitting behind. The second player has 27 points, meaning he is also out of the race at that point.

The footage quickly spread among the Fortnite community since it was very suspicious that two players at this level were putting up really weak fights. The footage made some believe that the pro player and the others teamed up to feed him eliminations since he has much higher points.

The points are for the World Cup, which will hand out millions in prizes. The higher the points, the higher the chances that the player has to qualify. All three have a solid amount of points but the player in question is the only one who has a good chance at that point.

Epic remained silent about the whole thing but that changed earlier today. The game developer confirmed that there was collusion and that it took place in several matches. Epic Games released a statement saying that all players involved will receive a two week competitive ban and will be ineligible for any Week 3 prizes. The statement confirms that the group includes the player who would have qualified for the game’s World Cup finals, which will take place in New York. The qualification spot has been removed from him and it will be handed to the next highest ranking in the NA side.

It took a few days but Epic has finally announced a decision on the controversial footage, which was commented on by over 4,000 people on Twitter.