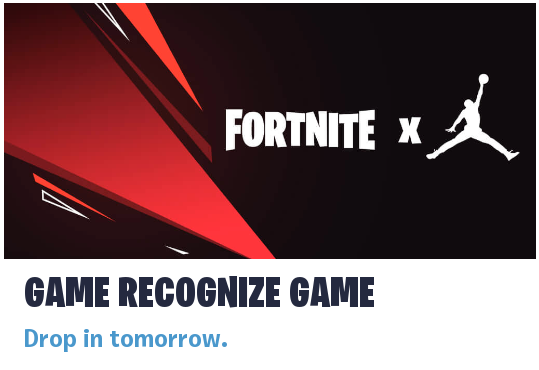 Fortnite will be having another collaboration in the near future. The collab will involve Michael Jordan’s Nike brand Air Jordan.

The teaser image only shows the Jordan logo next to the Fortnite logo. A tweet from the official Fortnite account posted four emojis, including a basketball and a goat. The goat likely means Michael Jordan, who is considered by many as the best to ever play the sport.

The News Section tells players to drop in tomorrow, which means that the collaboration will begin on May 22. There are no other details on this but there will probably be skins and cosmetics with the brand. In the last few collaborations, Epic has also dropped an exclusive limited time game mode (LTM) so we can’t rule one out for Jordan.

The John Wick event brought an official skin as well as an LTM for all players. The LTM brought a ton of free rewards, including a new umbrella and wraps. Back in Season 3, the game introduced The Reaper, a skin that was similar to John Wick. The collab between the two now leaves the game with two similar skins.

The John Wick collab is leaving the game soon but Epic is wasting no time in entertaining its players. The Jordan event is coming tomorrow, which means that it will launch just hours after John Wick.

In recent months, the game has also featured NFL skins with official uniforms from all the teams. The collab has been featured in the Item Shop twice, one for the start of the season and another for the most recent Super Bowl between the Rams and the Patriots.

Just a few weeks back, the game also had a collab with Marvel and its big film, Avengers Endgame. The collab brought a new LTM as well as some Marvel skins, including Black Widow. The LTM allowed players to unlock some cool Marvel cosmetics, including an Avengers Jet glider. In 2018, the game also had a collab but for Avengers Infinity War, which was the first of the two major films.

The game developer has also had partnerships with smartphone companies such as Samsung and Honor. Epic has released exclusive skins for the launch of the Galaxy Note 9, Galaxy Tab S4 and the Galaxy S10.

The company has done something similar with one of the smartphones from the Honor brand. The exclusive skins are among the rarest in the game since they are only available with the purchase of the devices.

The Fortnite x Jordan collab is one of several that have been featured in the battle royale game this year. Two have come in the last two weeks so Epic is going all out for Season 9, which launched earlier this month.

What do you think about this? What has been your favorite Fortnite collab so far? Let us know in the comments.