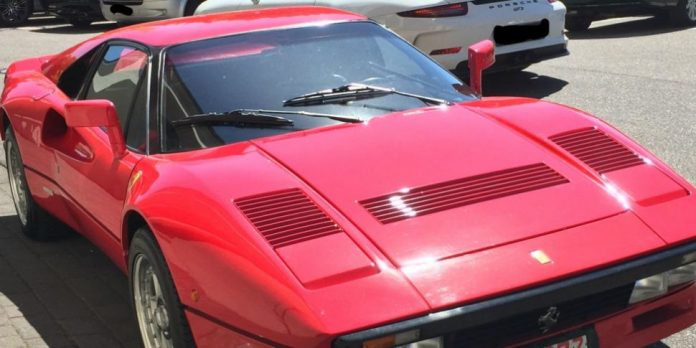 Authorities in the German city of Dusseldorf are now searching for a man who vanished with a rare Ferrari during a test drive. Police believe the man planned the test drive to steal the vehicle, which is said to be worth over $2 million.

It all began when the suspect expressed interest in buying the rare Ferrari, which is a 1985 288 GTO. The suspect showed up to the dealership by taxi and was then given the chance to go for a test drive.

The test drive appeared to be going well but it all changed when it was time to swap drivers. The seller stepped out of the vehicle to take the wheel but the suspect immediately hit the accelerator and disappeared with the rare Ferrari.

The BBC reports that similar versions of this car are frequently listed for more than $3 million in the United States. The car is not just rare but it has some history as well since the listing of the car mentions that it once belonged to former Formula One driver Eddie Irvine. He competed in Formula One between 1993 and 2002. Irvine was hired by Ferrari in 1996 and nearly won a title three years later.

The suspect probably didn’t think that he would be catching the attention of witnesses in such a rare car. Shortly after the theft, witnesses began reporting that the vehicle had been seen. The bright red car was found on Tuesday evening.

The car was sitting in a garage, just a few miles away from the city where it was stolen. Authorities now have the car but the suspect remains on the run. Police have released a picture of the suspect, who is seen wearing a suit and glasses. The picture was taken when he was inspecting the rare car.

The man seems to have planned the theft well as he not only asked for a test drive but also kept in contact to make it appear that he was really interested. The managing director of the dealership told a local newspaper that the man had made calls and sent e-mails over the last few weeks.

The Ferrari 288 GTO was produced from 1984 to 1987 at the company’s Maranello factory. The GTO was originally built for the new Group B race series and a minimum of 200 cars were required. The regulations brought low participation and the series never really launched. The 288 GTO never raced and the 272 cars made became road cars. 271 of the cars came in red while one came in black.

Several Formula One drivers were offered GTOs by the company. One of them was Eddie Irvine, who raced for Ferrari between 1996 and 1999. There are also six models, including one prototype, all thought to still be in existence. One of them is said to be on display at the factory.