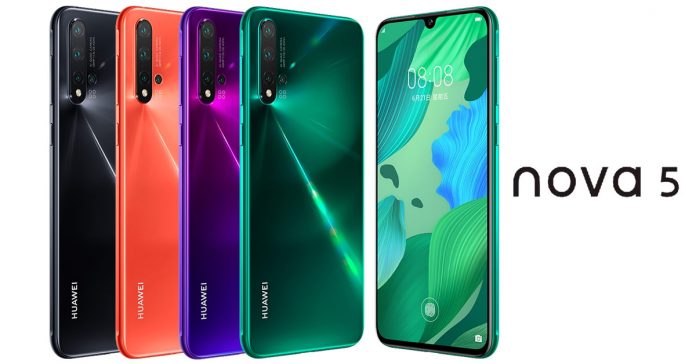 Huawei has announced three new phones, the Nova 5, Nova 5 Pro and Nova 5i. The announcements were made alongside the launch of the 7nm Kirin 810 processor, according to GizmoChina.

The launch of the new phones comes at a time in which the company is facing uncertainty over the whole Google dispute. The search giant suspended its Android license last month, leaving many questions on its devices featuring the operating system.

The uncertainty with Google hasn’t really stopped Huawei from announcing three new devices. The Nova 5, which comes with the new processor, has 6GB of RAM and 128GB of internal storage.

The Nova 5 Pro features the Kirin 980 processor, which is found on flagship devices such as the Mate 20. The Nova 5 Pro is more expensive than the Nova 5 but it does have 8GB of RAM and 256GB of internal storage.

The processor, price, RAM and internal storage are really the only differences between the Nova 5 and Nova 5 Pro. They both have a 6.39-inch display with a waterdrop notch in the middle. They also have a quad camera setup, with 48MP, 16MP and two 2MP sensors. Their 3,500 mAh battery is the same along with other features such as headphone jacks and USB-C charging ports.

Huawei has also announced a more affordable version that does things a bit different. The Nova 5i is similar on the back but the front and a few of the features are different. The most noticeable difference between the other two is that the Nova 5i has a hole-punch display on the top left side.

The Nova 5i also comes with a less powerful Kirin 710 processor. The interesting part about this version is that it does not skip on the quad camera setup. The setup is still there but Huawei has dropped the resolution to 24MP and 8MP. The back of the phone has a fingerprint scanner, something that the other two don’t have since they are equipped with in-display fingerprint scanners.

The Nova 5, Nova 5 Pro and Nova 5i will be launched in China at the end of the month. There is some uncertainty over what’s happened with Google and Huawei but it is currently unclear if the phones are going to be released outside of China in the near future.

Just a few days ago, it was reported that Huawei had delayed the launch of its Mate X foldable phone. The device was officially unveiled earlier this year but the delay has nothing to do with the company’s recent battles with the US government and the Google announcement. The delay is said to be over the Samsung Galaxy Fold issues, which forced the South Korean company to cancel the launch and conduct more tests. The Mate X is now launching in September.