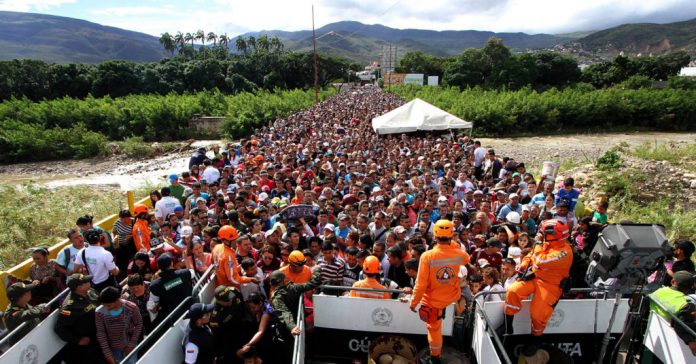 UN agencies have revealed that the number of people that have fled Venezuela is now at four million. The organization previously estimated the number at three million but that has quickly increased with the situation, which continues to get worse every day.

The previous estimate from the UN wasn’t too long ago, it was revealed back in November. This means that around one million people have left the country in less than nine months. Other estimates say that the number will likely continue up to five million.

Venezuela has shortages in just about everything, there is little medicine or food for the population. The latest shortage is fuel, which is now being sold by people in US dollars. The shortage in fuel has led to long lines at gas stations. In some states, people spend days waiting to fill up their gas tanks.

The situation in the country has not improved since the opposition and the government, which several countries see as illegitimate, are locked in a battle for power. Juan Guaido, who stepped in as the interim president earlier this year, has received the support of many countries, including Chile, Colombia, the US and Argentina. On the other side, Nicolas Maduro claims he is the president of Venezuela since he was the winner of last year’s elections.

Maduro, who won a presidential election shortly after the death of Hugo Chavez, won by a large margin, sparking doubts about the results and the whole process. The election saw the participation of small candidates and the boycott of the opposition. Maduro and his party were warned by the US and others that he would not be recognized as president.

The UN estimates come from data provided by immigration authorities and other sources. A spokesperson of the agency told the BBC that the number may be higher due to the unofficial border crossings.

A large percentage of Venezuelans have fled to nearby countries such as Colombia and Peru. Both countries have provided support during the crisis, which appears to have no end in sight.

The UN estimates that 1.3 million Venezuelans have entered Colombia. Peru is said to be second with around 768,000. Chile, Ecuador, Brazil and Argentina have also seen thousands arrive in recent years.

Venezuela currently has one of the highest inflation in the world. The majority of the population is now selling or buying items with other currencies such as the US dollar. The bills released by the government have already lost most of their value.

Maduro and supporters blame the crisis on the US, which recently imposed sanctions against state companies and officials. Most of the sanctions have come after the creation of the constituent assembly, which came after the PSUV party suffered a major loss in the national assembly elections in late 2015.

The UN and IOM said earlier today that the number means that Venezuelans are now one of the largest populations displaced from their country.