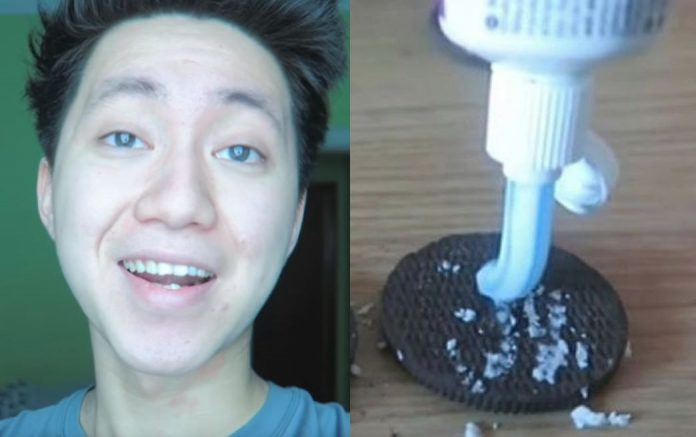 A YouTube star who made a video of a homeless man eating cookies filled with toothpaste has been ordered to serve a prison sentence over the incident. The footage was posted online and authorities later went after the YouTuber, who has been sentenced to 15 months in prison. He will also have to pay the man 15,000 euros for moral damages.

Kanghua Ren, who is known on social media and YouTube as ReSet, has also been ordered to stay away from the video site for five years, according to reports. ReSet, who was posting videos in Spain, was a very popular YouTuber in his country and many parts of Latin America. The Guardian reports that his channel was actually among the 200 most popular in Spain and Latin America. He had over one million followers at the time.

The channel was popular but that changed when he took on a dare two years ago. The dare asked him to remove the cream out of cookies and replace it with toothpaste. The YouTuber did just that and used the cookies for a video. The BBC reports that the YouTuber was originally dared by one of his subscribers to eat a cookie filled with toothpaste.

He offered the cookies to a Romanian man, who was homeless. The man was given the cookies along with 20 euros. The incident was filmed, sparking criticism against the YouTuber for his actions.

ReSet’s comments about the incident didn’t help the situation. He admitted that he probably had gone a little too far but that this helped him clean his teeth. The video was heavily criticized and was removed from the site a few days later.

Reports say the YouTuber looked for the man and gave his daughter 300 euros to try to convince them not to take legal action over the video. A judge in Barcelona ruled that this was cruel behavior and that he was going after easy or vulnerable victims. The BBC reports that the YouTuber first tried to find the man and give him 20 euros again. In his second attempt, he tried to give him 300 euros.

He was found guilty and given a 15 month prison sentence along with a fine and the order to stay away from the video site. Spanish newspaper El Pais saw the sentence and revealed that the judge had concluded that ReSet had harassed and humiliated the homeless person.

ReSet has close to 1.5 million subscribers on YouTube on his two channels combined. His new channel, which has close to 300,000 subscribers, made its last upload five months ago.

The New York Times reports that he is unlikely to serve any prison time since Spanish courts usually suspend sentences of under two years for first time offenders that have committed non-violent crimes.

The homeless man who appeared in the video was identified by Spanish media as Gheorge L., a Romanian man who was working as a shepherd before he decided to move to Barcelona. Spanish newspapers revealed that the YouTuber made about 2,000 euros from adverts that ran on the video.

It is not the first time that a prank video results in a prison sentence and huge fines for a person. But this is one of the biggest rulings so far since it not only involves a prison sentence and fine but also an order to shut down the channel. According to reports, he is now allowed to return to the video site until 2024.