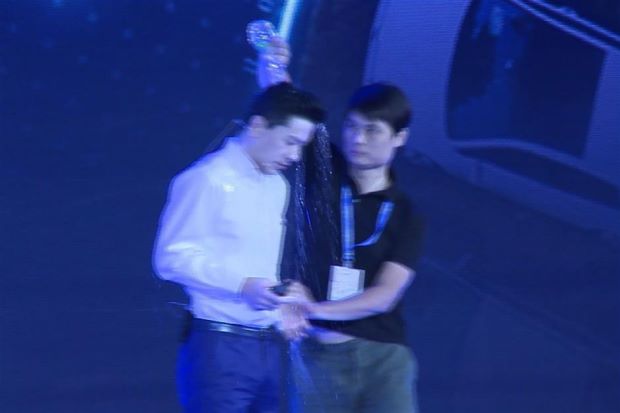 The chief executive of tech giant Baidu was interrupted during the company’s AI event. The interruption wasn’t from a man who ran through the crowd or did something to catch the attention of the audience.

Robin Li was interrupted by a man who walked on to the stage with a bottle of water. The man walked up to him, grabbed his arm and then decided to empty the bottle of water on his head.

The incident happened as the chief was giving a presentation on artificial intelligence. According to reports, Mr. Li can be heard asking the man what is his problem. The chief wiped the water from his face and the strange incident did not put an end to the presentation.

Mr. Li continued his presentation after the incident, saying that all kinds of unexpected things may happen on their way forward in AI development. Some news sites report that the interruption initially seemed to be part of the event but that changed when security came and took the man away. During the announcement, the company revealed several things about its plans with AI and some of the changes, including the new wake word. The new wake word now allows its smart speaker to respond to commands right away.

Baidu, founded in 2000, is one of the largest AI and internet companies around the world. The company has been China’s most popular search engine for more than a decade. But not everything has been perfect for Baidu.

In early 2019, the company saw its shares plummet by more than six percent after an article criticizing the company went viral. In May 2019, the search engine reported a net loss of around $47 million. That was the company’s first loss since going public 14 years ago. CEO Robin Li said at the time that the drop was due to the country’s economic slowdown and the government’s scrutiny of online content.

Back in 2016, the company was investigated following the death of a college student who attempted an experimental cancer treatment he found on the internet. The student’s family said he found the therapy through Baidu.

Before his death, he wrote a long post talking about his attempts to seek treatment and the experience. According to reports, he learned of a hospital in Beijing that offered treatment for his condition. The information was found through a search result on Baidu.

The country’s online regulator listened to the complaints and announced shortly after the death of the student that it would conduct an investigation into Baidu. Around the same time, health and military officials announced a separate investigation into the hospital. Baidu said through a Weibo post that it would cooperate with law enforcement to the best of its abilities and crack down on all illegal behavior.