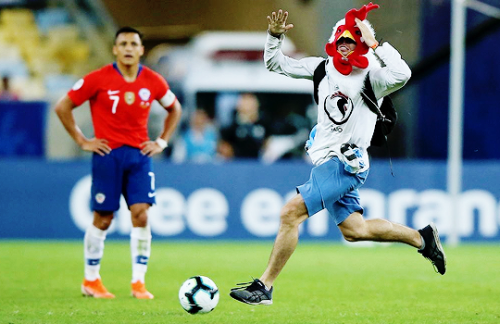 Kinsey Wolanski, the Champions League pitch invader who went viral, claims the two had plans to do the same for the 2019 Copa America. But the plans were foiled by authorities early on, leaving them with no choice but to have a vacation in Brazil.

Wolanski went viral during the Champions League final after she wore a revealing swimsuit advertising her boyfriend’s prank website. She was detained by authorities but the attempt ended up being a success for the model and her boyfriend.

Wolanski spent hours in a Spanish jail cell after her run across the field but reports say the stunt generated millions for her boyfriend’s website. She also gained millions of followers on social media.

A few weeks had gone by since the match between Liverpool and Tottenham but the couple had more plans to keep the stunts going. The 22-year-old model and her boyfriend Vitaly, who is known for his prank videos on YouTube and other video sites, were planning to invade the pitch during the match between Peru and Brazil.

Brazil went on to win the match 3 – 1 but there were no interruptions from the model or her boyfriend, who in the past has invaded NBA games and other sporting events. One of his biggest attempts came during one of the NBA Finals between the Cavs and the Warriors. Vitaly also ran into the field during the 2014 World Cup final between Argentina and Germany.

Wolanski wrote on Instagram admitting that Copa America had won but that they had an adventure trying. She explained that they dressed up and flew to Brazil, where the tournament was held. She says they made it to their seats but Vitaly ended up getting tackled by 20 security guards. She added that they were out of jail now and enjoying their time in Brazil.

The 2019 Copa America saw the host, Brazil, reach the final after wins against Paraguay and Argentina. Brazil continues to be third in the Copa America winners list, behind Argentina and Uruguay.

Peru earned a rematch against Brazil and even managed to tie the score after a penalty. But the host of the tournament later responded with two more goals, securing their first Copa America title since 2007.

There Was a Pitch Invader

Vitaly and Wolanski did not invade any matches but authorities did have to run after another pitch invader. The incident took place in the group stage match between Uruguay and Chile. The invader wore a chicken costume and ran across the field for a few seconds before he was tripped by a Chilean player. The invader was taken away by security guards and the game resumed seconds later.