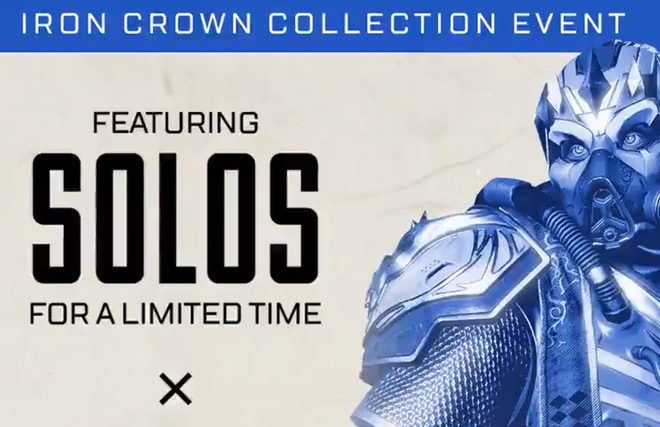 Apex Legends hasn’t really made any changes when it comes to game modes since its debut in February. The battle royale game has featured three man squads since the very beginning and it has remained that way. But that is about to change very soon, according to the official Apex Legends Twitter account.

Earlier today, the account posted that there will be a new event, called Iron Crown Collection, next week. The event is for a solo game mode, which will begin on August 13 and end on August 27.

The temporary solo mode will likely arrive with a few extra challenges and other content that players can unlock. Engadget believes that the solo game mode could be a trial run for a permanent solos mode or even other game modes such as Duos.

Solos, Duos and four player squads have been heavily requested since the game’s launch. The game has featured events in the past but it has kept everything for its three player squad matches.

Apex Legends is maybe the only battle royale game that offers just one option when it comes to game modes. Fortnite, PUBG, H1Z1 and COD’s Blackout are just some of the battle royale games that offer Squads, Duos and Solos. Games such as Fortnite have even brought other limited time game modes after requests from players. A few months back, the Epic Games battle royale game introduced Trios, three player squad matches.

Respawn Community Manager Jay Frechette wrote on reddit that they will talk more about solos when it is live and when players have had the chance to play it. He added that for now, they are going to put it out there and see what kind of feedback they get.

Next week, only one can reign. 👑

The introduction of game modes such as Solos will change a lot of the things that happen in a match. First, there will be no revivals after you get knocked down by an opponent. A knock will likely mean you’re out of the match, except if you happen to have a gold knockdown shield to bring you back.

Second, the ping system that makes the game so good will not be very useful since there will be no teammates around. There will also be no picking up banners and taking them to Respawn Beacons since it is just one player fighting against 59 others.

The introduction of solos next week has already sparked a discussion among Apex Legends players on social media. Like we all know, the game features 10 Legends, each with their own skills. But some characters such as Pathfinder appear to be heavy favorites among the community. This has already led to some players saying that the solo matches will be mostly filled with robots running around the map.

It will be interesting to see how this all plays out since Apex Legends has never featured anything outside of three player matches. The announcement video doesn’t give details on how this is going to work so we’re not even sure if the matches will be 60 players or if there will be some sort of mechanism to prevent players from using the same character over and over again.

We’ll keep you updated when there is more information on the upcoming game mode.