Chile: Employees of a Santiago Restaurant Stop Robbery With Chairs 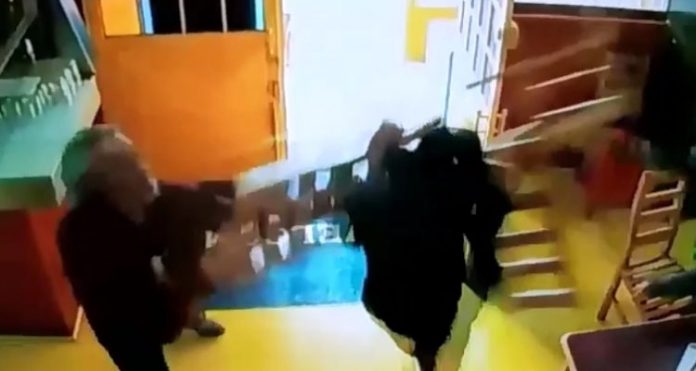 A restaurant located in Santiago was the target of four robbers who went in thinking they had everything under control. But the robbery attempt turned out to be a painful one for the four as the employees turned the situation in their favor with the help of chairs.

Videos taken from security cameras inside show the robbers entering the ”El Meson de Kike” restaurant and pointing something at one of the employees. Reports say the four were carrying knives when they entered the restaurant.

Another camera shows the robbers moving up to the counter and talking to the employees. But in just a few seconds, the robbers are left with no choice but to run from the restaurant as the employees arm themselves with chairs. The worst part for the robbers is that the chairs appear to be made out of solid wood.

The video does not show the entire moment in which the employees turn the situation around but the robbers appear to have noticed something since they are seen running towards the exit.

The escape attempt does not end well for the robbers as they are met by the employees at the exit/entrance of the restaurant. In the video, the employees are seen running after the robbers and waiting for some of them to go by. One of them barely gets by but another is met by not one but two flying chairs at the same time. The robber is stunned by the hits and another is seen attempting to come back to help but he receives a flying chair as well.

Most of the incident was caught on video by the security cameras inside the restaurant, which appeared to be without customers when the robbery attempt happened. The incident left several chairs broken and the robbers ended up leaving after receiving the hits from the employees.

Joaquin Abarca, the owner of the restaurant, spoke to T13 and said that the robbers entered the restaurant with knives and demanded for the money made during the day to be handed over. It is unclear if the robbers left with money.

He said he quickly contacted authorities and was told they would be sending a police unit. He added that police came to the restaurant four hours later.

The incident went viral on social media over how bad it ended for the robbers. Authorities have not given any details on the attempt but they have plenty of video to maybe identify those seen in the video.

It is not the first time that an incident like this goes viral. A few months back, a robber attempting to take money from a cashier in a mini market also had to run after a fight from the employees. The two women working in the mini market were threatened by the robber but the situation later turned very bad for him as the two women held him and almost had control of him before he got away. Reports later said the two women are from Venezuela, where they worked as prison guards.