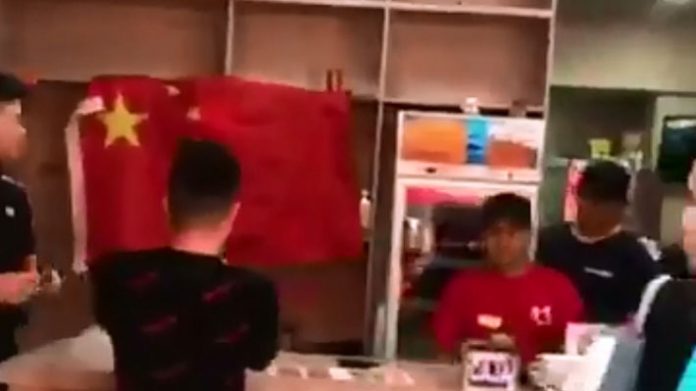 On Friday, posts on social media showed images and short videos of the protesters gathering inside and outside the restaurant. Reports say the crowd was showing support for the Chinese government at the restaurant after the owner made his support public for the Freedom Hong Kong movement.

Posts on social media accused the crowd of organizing the protest against the restaurant on WeChat, one of the most popular messaging services in China. It is unclear if anyone was arrested during the incident.

Focus Taiwan reported that the spokesperson for Taiwan’s Foreign Affairs condemned the incident and is making a complaint for the violent behavior by the group of Chinese citizens.

The spokesperson added that the Taiwanese government contacted the owner of the restaurant after the incident to let him know they are determined to secure the integrity of all of those out of the island.

The Foreign Affairs office has also offered legal help to the owner if he decides to file a report with Chilean authorities. It is currently unclear if the owner is considering a report against the group of people that showed up to the restaurant.

The spokesperson also showed support for the protests that have been taking place from the movement. The protests, which began more than four months ago, demand the removal of a proposal that would allow the extradition of Hong Kong residents to China.

The protests continued on Sunday but tensions escalated after authorities decided to use more equipment. According to reports, authorities used water cannons and one police officer fired live ammunition.

Protesters accuse authorities of responding to peaceful protests with force. Massive protests have taken place in recent weeks but the one on Sunday turned violent at night. According to reports, protesters turned away from the approved route and defaced a building they believe was used to secure attackers who went against protesters a few weeks back.

Authorities responded to the situation by deploying water cannons and firing tear gas canisters. Protesters then responded by throwing objects, including rocks, bricks and Molotov cocktails.

Local media reported that police officers drew their pistols during the protest. According to some outlets, one of the officers fired a warning shot into the air. Two men reportedly got on their knees and pleaded with officers so they would stop that.

Protesters are making several demands but their main focus is on the extradition bill. Vox reports that the protesters are also asking for the movement not to be seen as a riot, which could bring jail sentences for those arrested, and for authorities to release those who have been detained in the last few weeks.

Back in 2014, thousands protested in Hong Kong over a decision regarding the proposed changes to its electoral system. The protests lasted two and a half months.