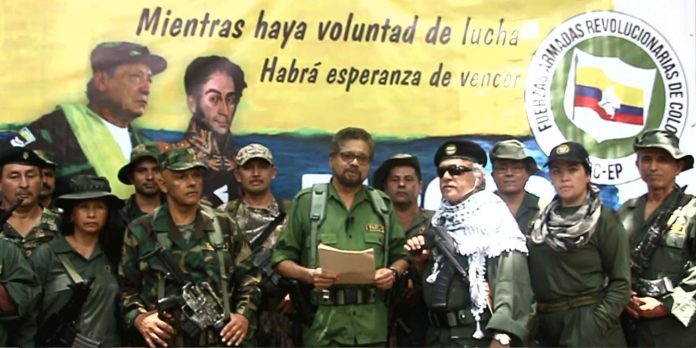 Colombia’s president has said during a televised address that the government will go after the new rebels. The televised address comes after a group of rebels, who were once part of Farc, called people to take up arms.

Ivan Marquez said during the video that in two years, over 500 social leaders and 150 former guerrilla members have been killed. President Ivan Duque responded by saying the rebels are narco-terrorists who have the support of Nicolas Maduro.

The video from the rebels shows Ivan Marquez reading out a statement in front of a large banner. He is surrounded by a number of men and women wearing camouflage uniforms. Some of the people seen in the video are holding weapons.

During the video, he calls for people to return to arms because the peace agreement that was negotiated with members of Farc has been broken by the Colombian state. In the video, he also reveals that the new group will have the old name, Farc, and that they will have different tactics.

He explains during the recording that they will only respond to offensives and that it will not be behind kidnappings for ransom. They say they will instead speak to local landowners and business people to try to get them to support their cause.

The Revolutionary Armed Forces of Colombia (Farc) were the biggest rebel group in the country before the peace deal in 2016. It was founded back in 1964 by a group of farmers  who decided to fight against inequality in the country.

For years, the government and rebel group met to discuss a peace deal. During 2016, there were reports that the two sides were getting closer and closer. The peace deal was eventually announced, disbanding the largest rebel group in the country but with the agreement that they could become a political party. The Farc political party was planning to compete in last year’s presidential election but its candidate left the race due to health problems.

The peace deal in 2016 was big news for the country since it ended more than 50 years of conflict. But the rebel group did not disappear completely, it is believed that there are many out there who did not follow the agreement.

The group’s leaders and close to 7,000 fighters gave up their weapons after the agreement but experts say there are still small groups out there. The BBC reports that a figure cited in a leaked military document a few months back reveals that there are 2,300 out there.

Part of the groups that did not stand down are said to be made up by people who never gave up their weapons or decided to return to what they had before. Some are even said to be new recruits.