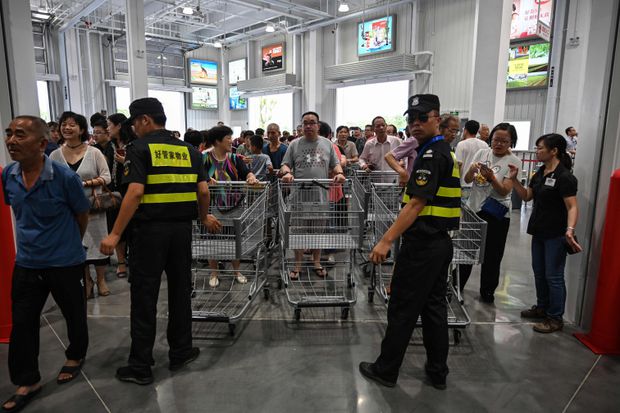 The opening of the first Costco store in China was a success for the company but the amount of shoppers forced the store to close early. The retailer opened the store on Tuesday morning and the situation quickly got out of control.

Large crowds entered the store and they were barely able to move as the shopping carts and amount of people took all the space. The retailer had no choice but to close the store to stop people from coming in. A text message from the company to its members said that the store was clogged up with crowds, adding that business would be suspended in the afternoon.

Videos of the store showed large crowds sitting outside. Inside, the shoppers went for everything they could. One part of the video shows what appears to be meat being picked up by many shoppers.

The amount of people inside the store led to long lines at the cashier and long waiting times at the poultry section, where videos showed people gathering as employees worked on the orders. Reports say many of the shoppers entered the store when some of the shelves were already empty.

Police were deployed shortly after the situation started getting out of control. A video shows what appears to be police officers sitting in front of the store to control the crowd waiting outside. Police were also at nearby roads to manage the traffic jams.

Shanghai Police released a statement on Weibo asking for those there to follow orders. The long waiting times were not just inside the store, a picture posted by police showed a sign which said the parking lot was full and the wait was three hours.

The long waiting times outside the store didn’t stop people from coming as the amount of cars created a traffic jam. The large crowds inside plus the many more waiting outside forced the business to close early.

In 2014, the company entered China through a partnership with Alibaba. In early 2015, it was reported that the company had done very well since its arrival. The opening is a major step for the company and so far, it looks like customers are very interested.

Costco and the Competition In China

Costco is quite popular in the US but the move to China will not be easy. The country has several retailers plus the growing online industry. There is a major difference between the Costco in the US and China. That difference is the price of the membership, which costs $18 less in China.

The company faces strong competition but day one of the store proved to be very good, despite the early shut down. Day two will probably attract large crowds since many couldn’t enter the store on Tuesday.

The Future?: 4 Interesting Patent Designs and Features From Xiaomi

Aug 7, 2020
Xiaomi has released some impressive smartphones over the years, including the Mi and Mi Mix devices. But the Chinese company appears to be focusing...