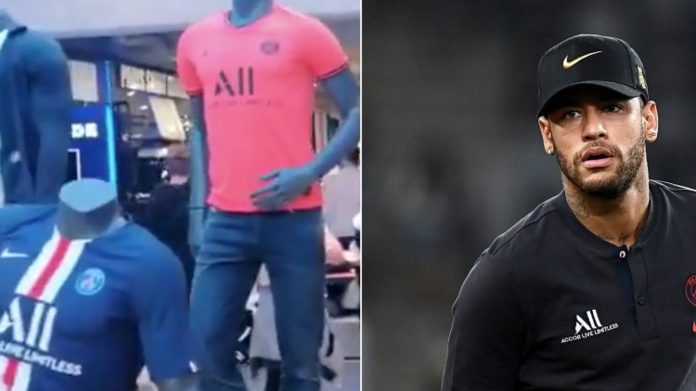 PSG’s official store sells just about every product related to the club. But fans won’t be able to find anything related to Brazilian star Neymar, who appears to be on his way back to Spain.

The club’s official store at the stadium has removed everything related to Neymar. The removal was spotted before the store’s opening on Monday. Uol Sporte reported that the only item that is related to Neymar there is a new boot from the player’s sponsor, Nike.

Reports say store employees were also told to remove anything that had to do with the player, including his image. The club’s store does have everything from its other stars, including Cavani, Mbappe and Verratti.

Neymar joined the French club back in late 2017. The transfer was one of the most expensive of all time and was a bit of a surprise since the Brazilian striker was surrounded by stars in Barcelona.

Neymar’s time with PSG has not gone perfectly. The Brazilian star debuted with a number of goals and assists but the French club has failed to win the Champions League. On top of that, Neymar has missed some time with injuries.

PSG currently has many stars, including World Cup winner Mbappe, who arrived to the club shortly after Neymar made his move. But the French club appears to be set on letting him go for an amount similar to what it paid Barcelona.

The Neymar transfer remains one of the most expensive of all time and those interested in signing him would have to spend a record amount. Barcelona and Real Madrid are reportedly in the race for a transfer.

For months, it’s been rumored that Real Madrid are interested in signing the Brazilian star. But the same is also being reported for Barcelona, which was the first to make a move for him when he was playing in Brazilian club Santos.

Reports have repeatedly said that Neymar wants out of PSG. The reports first surfaced just months after he made the move to PSG. Recent transfer rumors have Barcelona offering an amount of money plus some players, including Coutinho, Rakitic or Dembele. Real Madrid are rumored to be interested in a player plus money deal as well. One transfer rumor has the Spanish club offering Marcelo, Varane and Isco as part of the deal. Brazilian journalist Marcelo Bechler believes Neymar wants to join Barcelona but adds that he won’t think twice about joining Real Madrid if a deal cannot be made with Barcelona.

The club claims no message was made over the absence of Neymar’s image and products at the store. But everything comes at a time in which reports have a transfer getting closer. For days, it’s been mostly Barcelona but recent reports have Real Madrid showing interest.

Just a few days ago, star midfielder Marco Verratti spoke about the rumors and said that he wants Neymar to stay. Neymar missed the team’s opening Ligue 1 match on Sunday, adding to the rumors that he is on his way out.

The transfer window has brought some expensive moves from Atletico Madrid, Barcelona and Real Madrid. But a move for Neymar could once again set the record, which has stood close to two years.