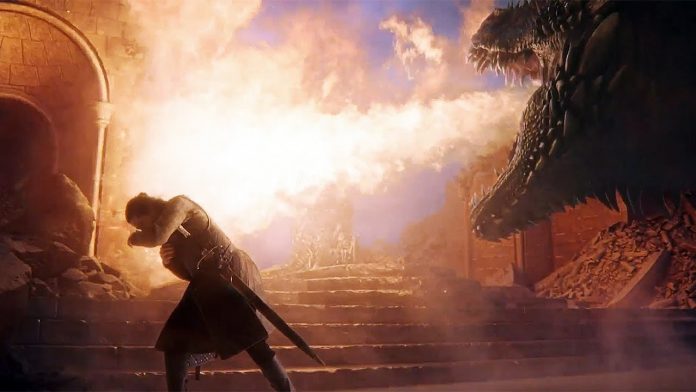 Warning: GoT Season 8 spoilers ahead.

Game of Thrones ended a few weeks back but there are still plenty of questions surrounding that one scene with Drogon, Dany and Jon. Dany’s remaining dragon was only seen in the last episode for a few minutes and the last thing he did left many wondering what he was thinking all along.

Seconds before everything happened with Drogon, Jon met with Dany and he decided to put an end to it all. Dany was killed and Drogon came by to see what happened. After confirming that she was dead, he turned his attention to the Iron Throne and set fire to it.

The throne just happened to be standing in front of Drogon when he confirms that she is really dead. According to everything seen in the script, he is really making no connection between Dany and the throne. He just finds out she is dead and goes off on the throne, leaving nothing.

The script reads that the fire sweeps towards the throne, not the target of his wrath. It then adds that it is just a dumb bystander caught up in the conflagration.

This pretty much confirms that Drogon was not thinking about the throne, just taking his anger out on whatever was in front of him. Jon was also standing close and many of us initially thought that would be the end for him. But it was the Iron Throne that got roasted instead.

There was a lot of hype surrounding Season 8 since it was known that there was only a few episodes left and everyone wanted to see who would sit on the Iron Throne. But the season ran into some criticism early on, especially with the episode involving the Night King.

The series continued to get criticized over the next few weeks. There was so much criticism that one fan posted a petition asking HBO to remake the final season with different writers. The petition went on to get many signatures but a remake has been ruled out.

There is still a ton of unanswered questions surrounding Season 8 but fans now know that Drogon was just taking out his anger on something. It would be interesting to know where he went to after the scene since he is just briefly mentioned once at the end of the episode.

What do you think about Drogon’s scene? What did you think of the final episode? Let us know in the comments.