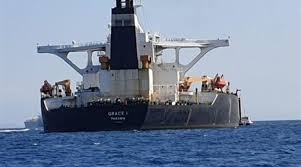 Gibraltar has released an Iranian oil tanker detained last month. The UK territory received written assurances from Iran that the oil tanker would not continue to Syria and leave its cargo there.

The oil tanker, detained last month on suspicion of attempting to get by sanctions, was reportedly in the territory on Thursday evening. But witnesses told Reuters that it had moved.

Iran Criticizes the US

Iranian Foreign Minister Javad Zarif criticized the US government for attempting to stop the release of the oil tanker. He called it a piracy attempt. The UK Foreign and Commonwealth Office said the country must follow what is said on the assurances. The agreement is for the tanker not to head to Syria, a country that is under sanctions by EU.

The detention of the oil tanker has triggered a standoff with Iran. Two weeks after the oil tanker was detained, Iran seized a British tanker. Since then, there have been rumors of a swap between the two.

The Grace 1 was detained by Royal Marines on July 4. Reports say about 30 marines made their way from the UK to the territory, where they stopped the ship with the help of police. This triggered a diplomatic crisis between the two countries. The crisis escalated when the British tanker was stopped weeks later.

Gibraltar’s Chief Minister Fabian Picardo confirmed that the tanker had been released. He revealed that the US Justice Department had requested a new legal procedure.

The tanker stopped by Iran remains there and the country has accused it of violating international maritime rules. It’s been 27 days since it was stopped and the UK has described the incident as state piracy.

Diplomatic relations between the US and Iran have deteriorated in recent years. Back in 2015, the sides agreed to a deal that would limit the country’s nuclear activities and remove the sanctions that had been imposed. But last year, the US decided to withdraw from the deal, which first started being discussed in 2013.

The US suspects that the country is continuing its efforts to develop nuclear weapons. Iran has denied all of that. The UK and other European countries have not withdrawn from the deal. The long-term deal was made after months and months of meetings and discussions between Iran and the members of the United Nations Security Council. In November 2018, the sanctions against Iran came back into effect.

The detentions of the oil tankers are just part of the standoff between them. The US has also blamed Iran for the recent attacks on tankers. Iran has denied any involvement in the attacks.