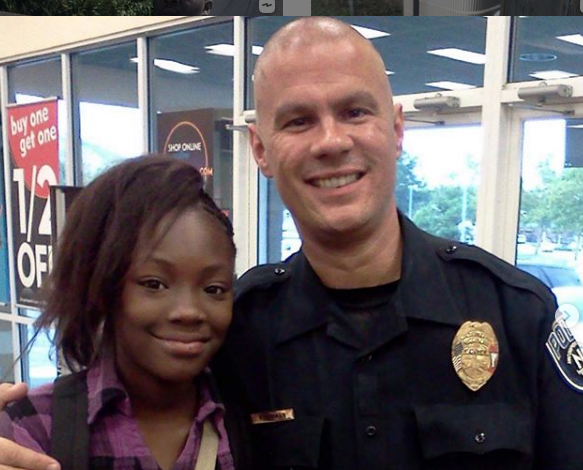 While media outlets invest money and manpower covering tensions between police officers and the residents they serve, news of cooperation and bonding often gets lost in the shuffle. Fortunately, other avenues exist to spread this information far and wide. Those who follow the day in and day out activities of Officer Tommy Norman of the North Little Rock, Arkansas police department would be otherwise ignorant of his good works were it not for social media. Ironically, the very public-spirited contributions he makes on behalf of his neighbors predate this relatively recent form of communication. For years they went virtually unnoticed.

A Good Reputation Leads to Influence

A murder suspect from outside his jurisdiction once contacted Officer Norman to surrender to Little Rock authorities. Although Norman works in North Little Rock, his reputation preceded him as a constable who treated those he apprehends with a modicum of dignity. The arrested individual heard about Norman from word of mouth and the two met up, with the officer taking the suspect into custody and turning him over to Little Rock police without scuffle or tumult.

Officer Norman’s notoriety on the street–even far from his regular beat–is evidence of the impact his policing has on his community. Neither soft-headed nor hard-hearted, he believes his work as a police officer is part of a larger call to serve. First and foremost a citizen, Officer Tommy Norman does not evaluate his work in terms of arrests and convictions but rather by the trust level he attains on both sides of the badge–his peers and his neighbors.

Born and bred in North Little Rock, Officer Norman practices empathy on the job, an empathy that is continually cultivated. The rapper Killer Mike cited Norman as part of the solution to urban problems: “This man is out of his patrol car every day. He has taken pictures with other families that are black, with white kids in the community — he’s in the community.” Human interaction is key for this law enforcement man. He shoots baskets, learns dances and shares life with city dwellers. Then, when a hard task must be done by police, there is a little less resentment among community denizens.

Officer Tommy Norman is certainly not the first to reach out and forge bonds with the people he is pledged to protect. Still, he is a pioneer in the field of making this form of policing viral in terms of social media. Helping the elderly with groceries; cutting grass while off duty; attending graduations; wholesome socializing; and basic politeness have gone a long way to make Officer Norman an object of trust in North Little Rock. His conviction is that people beyond his hometown need to know that patrol officers can be friendly, personable and–most importantly–compassionate.

The popularity of platforms like YouTube, Facebook and Instagram, to name a few, is an opportunity that Norman seized upon to highlight the positive relationships between police and residents where he works. Posting photos, commentary and videos of citizens of all backgrounds overcoming challenges, getting along and working with law enforcement personnel, Norman shows the world what is not only ideal, but possible. He reminds his online audience that North Little Rock dwellers have names and loved ones and dreams and values. They are not just masses of resentful and bitter police-haters, but human beings with whom he has more in common than differences.

With followers reaching well over a million on each of his platforms, Officer Tommy Norman has gained the notice of cable news channels and, as noted above, cultural icons like Killer Mike and fellow rapper The Game. He has parlayed this fame into other ways to serve. Mission Give is his own foundation that pursues a two-pronged calling to strengthen connections among all populations within communities and to remove the endemic problems that make neighborhoods poor and unsafe. Yet Norman is modest. At bottom, he is simply a neighbor trying to do some good, Sometimes that work is done wearing a uniform and badge, but not always. He understands that police work is a job but community is life.