Samsung is off to a not so good start with the Galaxy Fold. The foldable device was originally set to be released in late April but that came to an end when early reviewers pointed out some issues.

The delay has brought doubts among the tech world on if foldable technology will take off in the near future. The delay and cancellation of pre-orders appears to be no problem for Samsung as recent patents spotted by LetsGoDigital are focused on more foldable designs.

The Galaxy Fold has not made its big debut yet but the patents are clearly a sign that the company has more ideas in mind. According to reports, a patent for a foldable design was approved back in May. The patent is said to be for a Z-fold design, which would allow the phone to be bent in a different way. 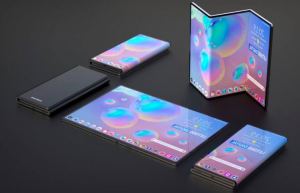 shape. The design looks quite interesting from the renderings but this is a patent so this isn’t a 100 percent guarantee that the company will go on with it.

There is no information as to what the specs or features are going to be but from the renderings, we can see that the phone will be large. From the pictures, we can kind of guess that this version will be three times wider than a regular smartphone. Samsung has released large smartphones in the past but this is pretty much taking things to a new level.

Other Patents From Samsung

The information on this patent comes just weeks after LetsGoDigital also reported on another patent from Samsung. That patent is another interesting idea from the South Korean company. There seems to be foldable technology in there but the interesting part is that the phone is said to be rollable. The renderings show a mechanism that allows the phone to fold and be much smaller or larger. The big feature is that the screen can be rolled out, turning the device from a smartphone to a tablet.

The Galaxy Fold is off to a troubled start and with its nearly $2,000 price tag, many will likely think twice about getting one. But Samsung appears to be very interested in the idea of having other foldable phones with different designs and features. The latest patent is yet another sign that we could have totally different smartphones in the next few years.

Only One Foldable Phone In the Market

It will be interesting to see how successful these phones are once they are released. There is only one foldable phone representing this new technology at the moment. That is Royole’s FlexPai, which was unveiled way before the Galaxy Fold and Mate X.

The Galaxy Fold and Mate X are said to be coming soon so we won’t have to wait very long for this technology. What do you think about the design? Do you think foldable phones will be successful in 2019? Let us know in the comments.