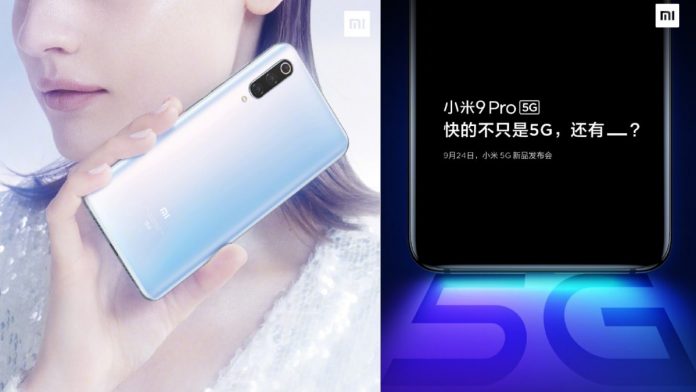 Tech giant Xiaomi is unveiling a new device very soon. That device is the Mi 9 Pro 5G, which is going to be unveiled at an event in China on September 24.

The phone is an upgrade of the Mi 9, which was launched at the MWC event earlier this year. The Mi 9 Pro 5G has 5G support, which is currently available in just a few smartphones. Here is everything we know so far:

The phone is going to be unveiled on September 24, which is less than a week away. The event will take place in China. There are no other details at the moment but the event will likely provide more information on the markets in which the phone will be available in the near future.

Important information such as price and specs are likely going to be announced there as well. But there is already information on some of the major features and improvements that the phone is going to bring.

Specs and Other Details

The name gives away the fact that the phone is going to support 5G. This is not very common among smartphones right now but the technology will continue getting more and more popular soon.

The specs have not been revealed but it has been reported by several tech sites that the phone will come with a Snapdragon 855+ processor. This processor has already been confirmed for other phones, including the Redmi K20 Pro.

GSM Arena reports that the device will also come with a very fast charging system. The site says it is going to be 40W wired and a world record 30W for wireless. Xiaomi’s CEO Lei Jun has said that the phone will charge from 0 to 100 percent in 48 minutes with wired. Wireless will take 69 minutes.

The company has also released an image of the phone, which looks almost the same as the Mi 9. In the image, we can see that the upgrade also features a triple camera on the back. On the front, we see the same notch as the one from the Mi 9.

There isn’t much difference between the Mi 9 and Mi 9 Pro 5G when looking at the images. But the differences will likely be found in the hardware, with the fast charging and 5G as some of the things that make this phone an upgrade.

The official image of the upcoming phone does show a new white color option, which is not part of the Mi 9. This could mean other color options for the upgrade but we’ll have to wait until the event.

The Mi Mix 4 is expected for the same event or early October. The device has made noise over the last few weeks since it is rumored to be very powerful when it comes to specs. The Mi Mix 4 could end up bringing 5G support, just like the upgrade of the Mi 9.

The rest of the year could also be big for the company. This year, the company has released teasers of its foldable phone. There are little details on the foldable device but the technology has started taking off, with Royole and Samsung as the ones currently selling foldable devices. Huawei’s Mate X foldable phone is rumored to be debuting some time this year.

Feb 24, 2020
Search giant Google has warned people not to find alternative methods to install apps that are not part of their devices. The warning is...