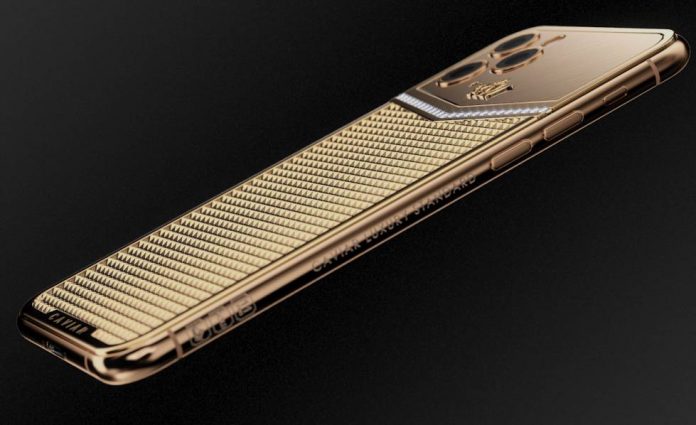 Russian luxury brand Caviar has announced a new iPhone 11 Pro that is way more expensive than the standard version sold by Apple. This new version of the device is called Victory and it features the V on the back.

There are four editions of the Victory devices, including Titanium, which is the cheapest version at a price of $4,290. That is for the 64GB variant so if you want more storage on that edition the price goes a few hundred up.

The Victory devices also offer iPhones with black alligator leather or diamonds on the back. The version with the diamonds is one of the priciest at $30,820.

The latest designs from Caviar are not super crazy but the prices are up there as some of the highest when it comes to its limited edition iPhone 11. This is the second release of the company since the launch of the iPhone 11.

The Titanic and Vostok-1 versions include a fragment of the ship or the spacecraft. Caviar didn’t really talk about the process of obtaining the fragments but the company did show pictures of the phones, which have the fragments on the back.

The design and fragments make the two devices very expensive. The Titanic version has a starting price of $7,310. This is nowhere near the price of the Vostok-1 version. That phone has a price of $33,760. The price is for the 64GB variant so if you want more storage the price goes up to nearly $35,000.

The brand has announced that it will only be making a few units of the two versions. Tech sites report that the brand will only make ten of the Titanic iPhone 11.

The Discovery and Victory series are the only two iPhone 11 releases by the company. But Caviar has become famous over the last few years for its super expensive designs. Earlier this year, the company created a Galaxy Fold design for Game of Thrones fans.

Not too long ago, the company went for an even more expensive design with the Galaxy Note 9. The phablet customized by Caviar features 1kg of gold on the back. The price? $60,000. In October 2018, the company released an iPhone XS with a mechanical watch on the back.

Before that, the company announced an iPhone X with a solar panel on the back. Caviar said at the time that it would only make 999 units, which started at $4,500.

The iPhone 11 is just a few weeks old but Caviar has already announced two super expensive designs. It probably won’t be long before the brand returns with another crazy design for the iPhone 11 or another flagship smartphone.