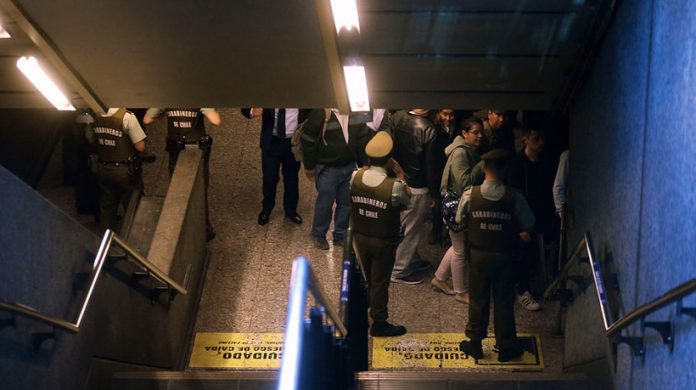 The clashes between police and students intensified on Thursday, with things getting out of control in some of the busiest stations of Metro Santiago. The clashes began early in the day as hundreds of students decided to continue their protest against the recent increase.

A video taken by Radio Bio Bio shows the damages left to the Los Heroes station. In the video, a group of people are seen standing near the broken glass panels located next to the turnstiles. At the end of the video, a person is seen grabbing a metal pipe that was holding the glass panels and hitting the last piece of panel.

The incident at the Los Heroes station was one of the few that took place across Santiago metro stations. In another incident, a group of female students were seen pushing a gate until it was opened. Four police officers are seen standing and stepping away as the crowd enters the station.

In another incident, a person is seen damaging the turnstiles and the scanner that is used to pay and get through. A video of a different incident shows a crowd gathering near the turnstiles when an elderly woman attempts to hit some of the people entering without paying. 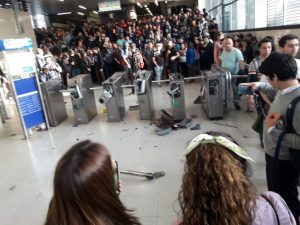 The protests by the students come just days after the government introduced a new price increase. The increase is small but some of the population complains that the prices are going up while the salaries are not.

Since the increase, students have showed up at stations and hopped over turnstiles or simply protested over the decision. Thursday saw most of the incidents and there were several stations damaged or shut down.

Many of the capital’s most popular stations were guarded by police. But that didn’t stop the protesters from opening gates or clashing with police. In one incident, police attempted to disperse a crowd that gathered to protest against the increase. Reports say several people were arrested on Thursday over the incidents.

Transport officials have criticized the behavior displayed by the people against the increase. Just a few hours ago, lawmakers introduced a proposal that would fine people up to 480,000 pesos for not paying at train stations. The lawmakers explained that the current laws are not enough.

Lawmaker Jorge Alessandri got the response of over 1,000 people when he made a tweet saying that Metro Santiago would double security and that the cost would be added to the prices. He later made another tweet saying he understood the disapproval for the increase but that he was not okay with the violence.

In recent days, authorities have decided to partially close the entrance of the stations to prevent the protesters from running into the area and avoiding the turnstiles. Over the last few days, several groups, some of students, have gathered at stations and decided not to pay.

In some stations, authorities have partially closed the gates and opened smaller doors to keep control. In other stations, the security measures have not been enough as students have removed or knocked down the gates to protest inside.