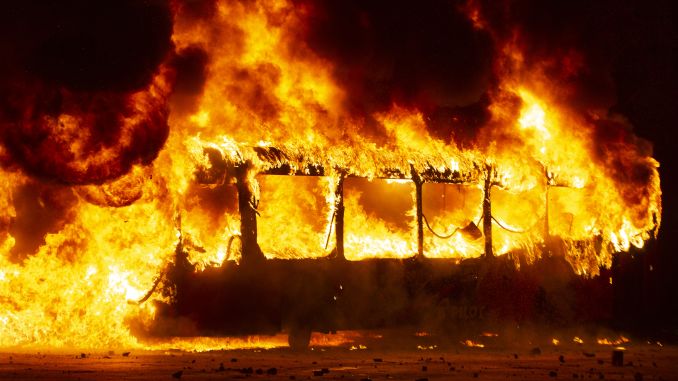 The announcement later spread to Valparaiso and other cities, where armed forces were deployed to regain control. Saturday’s clashes left hundreds detained and many injured.

The curfew ended at 7 AM on Sunday and many protesters took the streets to once again show their disapproval for the government’s recent fare increase. Yesterday, the government announced that it was going to suspend the decision. But that didn’t stop the looting and the violence from spreading to other cities.

During the late hours of Saturday, looting spread to many other communes of Santiago, including Independencia and La Florida. In Independencia, local media showed videos of looters stealing refrigerators, TVs and other products from the Lider (Walmart) and Acuenta supermarkets.

Local media later showed a second video in which authorities arrived and surrounded the Lider supermarket. Several police officers, who were dressed as civilians, entered the supermarket and arrested two people. In La Florida, things got chaotic as several businesses were looted and burned.

Authorities recently said that there have been over 100 businesses affected by the looting, with a small percentage of the businesses completely destroyed by fire.

On Sunday, the protests returned to many points of Santiago. But the government announced an early curfew, leaving many parts of the city completely empty. In some places, people continued a peaceful protest and even worked with authorities to keep control.

In various communes, there were reports of looters arriving with cars and stealing from homes. A video reportedly taken from a residential area in Puente Alto shows a group of people chasing after a person believed to be a looter.

In La Florida, several people protested and even made signs calling for the president to step down. But they also made it clear that the protest would not turn violent. Some of the protesters also had sticks and other weapons to stop people from looting the supermarkets in the area.

Lider, Tottus and many other supermarket chains announced yesterday that they would remain closed. Small businesses across the country opened early but decided to close over fears of looting and the curfew, which began three hours early on Sunday.

Reports say over 1,400 people have been detained across the country. On Saturday, there were more than 700 detained. Local media showed videos of various arrests that took place outside of supermarkets and malls. In one of the newest malls of the commune of Independencia, police arrested at least ten people that were caught looting.

The unrest has left damages in many of the metro stations across Santiago. The protests began after the government announced a fare increase during peak hours. The protests started on Monday but they intensified on Friday. The incidents have forced school activities to be suspended across the Metropolitan Region.

Officials have said during Saturday and Sunday that most of the looting and violence has been reduced due to the curfew. In some communes, residents have already started cleanup efforts in the metro stations that suffered heavy damages. A public transport official recently said Line 1 of Metro Santiago would be 80 percent operational. In other areas, residents could be without this method of transportation for days or even weeks since trains were partially burned and stations were left completely destroyed by fires.