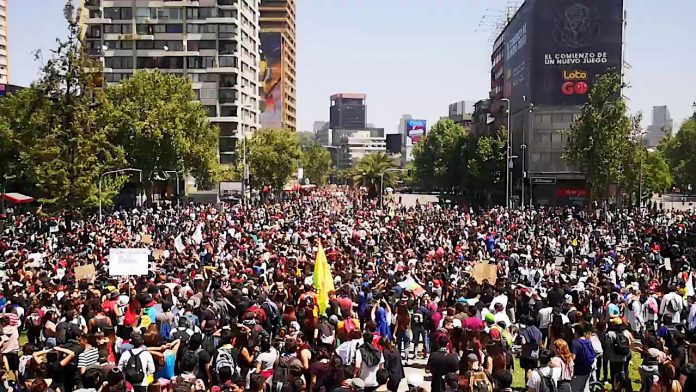 Protesters have continued taking the streets of Chile’s capital and other cities after an apology from the president and an announcement for economic reforms. On Wednesday, thousands took the streets to continue the protests, which intensified last Friday.

The unrest started last week, when metro prices were increased. The first protests began with students simply avoiding the turnstiles and using the metro without paying. Other protesters showed their disapproval of the increase by standing near the tracks.

The start of the protests mostly involved students, who would avoid paying by entering the stations in groups. But on Friday, the government was forced to declare a state of emergency in some communes and the capital Santiago.

The protests went from metro stations to the streets. On Saturday, things got out of control as there were reports of looting in many supermarkets and businesses across Santiago. Police responded by dispersing crowds with water cannons and rubber bullets.

The protests and looting continued and president Sebastián Piñera decided to speak to military officials and call a curfew, which later spread to other cities, including Valparaiso.

The situation has left many metro stations completely destroyed and many others not fully operational. On Tuesday and Wednesday, public transport collapsed in many areas of the capital since Metro Santiago was not fully operating.

The protests began more than six days ago and they show no signs of slowing down in some areas. Reports say about 20,000 soldiers are patrolling the streets. Incidents during the six days of protests have left more than 15 people dead.

In at least two incidents, people have lost their lives inside supermarkets and businesses that were broken into. In the capital, a man lost his life inside a supermarket that was looted. The body was found when authorities were attempting to detain a person that was looting.

Human rights groups have expressed concerns about how authorities have handled the protests. The police was initially sent in to control the situation but the curfew that started during the weekend brought the military to the streets.

Sebastián Piñera said shortly after the protests intensified that the price increase would be removed. On Tuesday night, he addressed the country with plans for an economic reform. The reforms include the increase of pensions as well as the increase of minimum wage.

The minimum wage was increased months back but many considered it to be very low still. Some of the protesters still believe that the minimum wage needs to be higher, with some holding signs that it should be about 500,000 pesos and not the 350,000 promised with the reforms. The announcement on Tuesday night did not calm things down. On Wednesday, protesters were back in many of the popular points of Santiago and other cities.

The unrest has nearly paralyzed the capital and other big cities. In Santiago, residents have had trouble getting to work since public transport is not operating at 100 percent over the damages left to the metro stations. Millions of students have not been able to attend classes after activities were suspended before the start of the week.