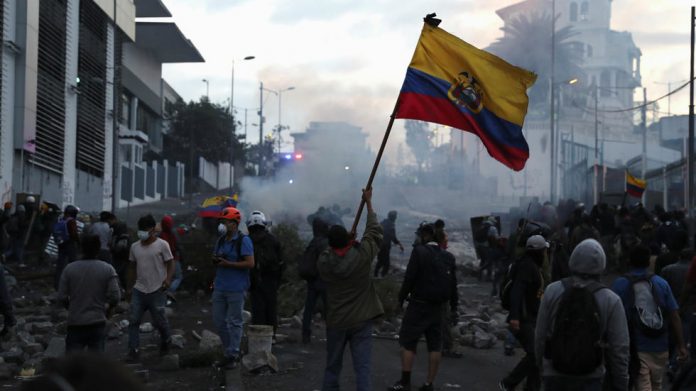 Lenin Moreno and indigenous protest leaders have reached an agreement to end the protests. The agreement comes after violent protests left seven people dead and many others injured.

Moreno was looking to end the fuel subsidies but that caused anger among the population. On Sunday, he appeared to have changed his mind, saying the agreement was necessary to restore order in the country.

Some of the biggest cities in the country had been put to a stop by the violent protests. Cities such as Quito were divided by barricades and some of them saw clashes between protesters and authorities.

The agreement on late Sunday put a pause to the protests, which began over a week ago. Workers and protesters began a cleanup shortly after the agreement was reached. But not all sides are 100 percent convinced that everything is going to go perfectly. The Confederation of Indigenous Nationalities of Ecuador released a statement saying that they celebrate the victory but that it isn’t over until the agreement is completely done.

The agreement reached on Sunday is not complete since there are still some details that have yet to be discussed by the two sides. The only confirmation from the agreement is that there will be no Decree 833.

Decree 833 was the announcement that sparked the protests on October 1. The plans from Moreno were to get rid of the fuel subsidies that he said were costing the country more than one billion dollars every year.

He made the announcement as part of a package that was agreed for a loan. The South American nation was looking to meet the requirements for the $4.2 billion loan from the International Monetary Fund (IMF).

The removal of the fuel subsidies increased gasoline and diesel prices. The population quickly took the streets to protest against the moves from the government. Streets were barricaded and activity in many of the big cities was paused, leading to big losses.

The agreement is a major win for the protesters but it also leaves many questions on what the government plans to do next. The country’s economy has struggled in recent years, especially with the decline in oil prices.

The end of Decree 833 puts the deal with the IMF in question. Last month, the government met the requirements to receive the $4.2 billion loan. As part of the deal, he agreed to get rid of the fuel subsidies, increase the monthly payments for some families and drive up the taxes for high-income businesses.

The removal of fuel subsidies is now out of the picture so this puts the deal between the IMF and the government in a shaky place. The agreement sparked celebrations in Quito and other cities, where many recently took the streets to also help with the cleanup operation.