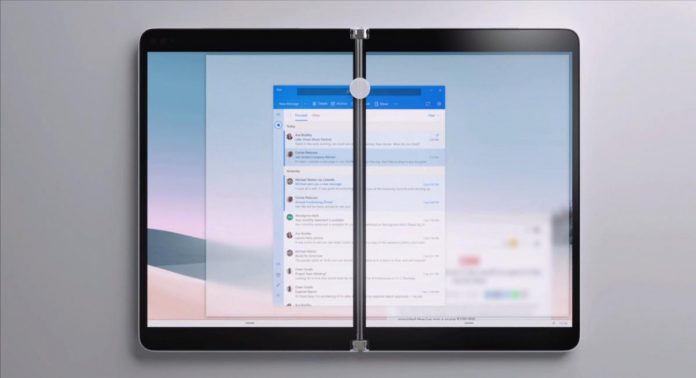 Microsoft has announced two foldable devices but the company has taken a different route when it comes to their design and hardware. Microsoft’s new devices do not feature a bendable display and the cameras are not high tech like the ones seen on other foldable phones.

One of the two devices is the Surface Neo, which has two screens that open up to a 13-inch display. There is a split in the middle, making this technology a bit different from the Galaxy Fold or other foldable devices. This device comes with Windows 10X, an operating system designed to run on devices like the Surface Neo.

The other device is the Surface Duo, a smartphone that opens up to a 8.3-inch display. The two share some similarities as they both have a split in the middle. The big difference from the other is that this device runs Android.

Panos Panay, Microsoft’s chief product officer, spoke to BBC and gave the news site a demonstration of the devices. The news site got to see the devices before their public announcement on Wednesday.

He said that they are going to get developer units out pretty soon. Mr. Panay did not give any details on the price or an exact release date. He did say that the products will be released in a year’s time.

The Surface Neo appears to be more of a laptop since it can be positioned that way. The split in the middle is a little different from what the competition has but that design appears to have been a favorite in the company since the smartphone also has one.

The Surface Duo will enter a foldable phone market that is not very crowded. The only companies in the mix right now are Samsung, Royole and Huawei. The only difference is that this phone has a split while others like Samsung have managed to come up with a bendable screen. Samsung’s idea hasn’t really gone smoothly, the Galaxy Fold was delayed back in April after some issues were found. The Galaxy Fold recently became available in South Korea and is expected to be launched in other markets soon.

Other foldable phones such as the Huawei Mate X are expected to be released this year. The Mate X was set to make its debut months back but the phone was delayed. Huawei’s device is currently the most expensive at $2,600.

Samsung and Huawei have opted for high tech on their phones but Microsoft appears to be taking a different route. The two devices from Microsoft have one front facing camera. In comparison, the Galaxy Fold has multiple cameras, allowing the user to take different types of pictures and videos. Microsoft did not give any details on the cameras of the devices.

The company’s two new devices appear to be part of the Surface series, which debuted back in 2012. The series has been a huge success since its release and it is now a major part of the company.

The Surface Duo will enter a small foldable phone market but that could change in the near future as several companies are said to be interested in releasing a foldable phone. Xiaomi is among the companies said to be working on one. The Chinese tech giant has already released two teasers of the phone but it hasn’t shared details on when it will make its debut. Other reports have mentioned that companies such as Samsung and Huawei are already thinking about more affordable foldable phone options since their new releases are a bit pricey.