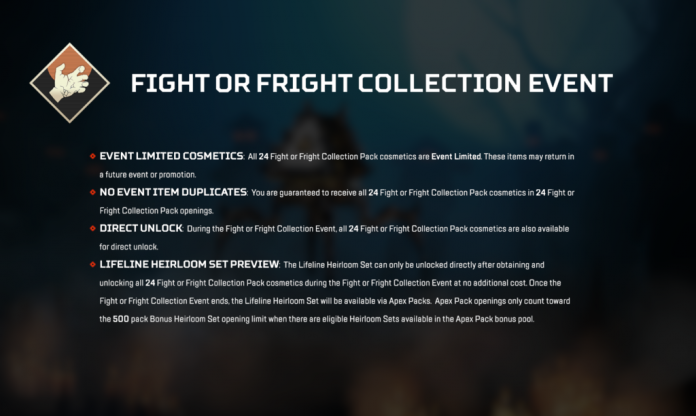 The Fight or Fright Halloween event for battle royale game Apex Legends is kicking off tomorrow, October 15. The event, which comes two weeks after the launch of Season 3, has a Halloween theme. Here is everything you need to know about the upcoming event:

The Fight or Fright event will introduce a new solos game mode. Yes, solos will be returning but this game mode will be different from the solos mode that was available as a limited time thing a few weeks ago.

The new game mode will drop players as if it was a normal match. Players will compete until there are ten left. From that point, they will have to try to survive against those who have been eliminated.

One of the interesting parts about the new game mode is that it is said to be taking place in King’s Canyon but at nighttime. This should provide an interesting experience since players will be doing everything they can to be in the top ten remaining.

The return of the King’s Canyon map is something that’s been requested by some players recently but at least they will have a nighttime version of it during the event.

The new event will also introduce a number of weapon cosmetics and skins. The theme is all about Halloween so each cosmetic will likely have something to do with it.

The skins that will be part of the event are all confirmed to have a Halloween theme. Mirage will have a cowboy costume while Caustic will be a clown. The skins were leaked days before the event was confirmed but now we know that all legends will have one, including the latest addition to the game, Crypto.

Details on the event have been posted on the Apex Legends reddit page. In there, it was revealed that the event would not have any free Apex Packs for completing the challenges. The rewards for challenges will likely be for weapon cosmetics instead.

The news were a bit disappointing for some of the posters since events like Iron Crown did have the option to unlock two free Apex Packs with the completion of some of the challenges.

It has been reported that the skins will be available through the packs and that players will also have the option to purchase one by using the metal, which is earned through the Battle Pass or by opening Apex Packs. The only negative about the metal option is that the skins will be available for 2,400 metal and not the regular 1,200 metal that players can use to craft a Legendary skin.

The Fight or Fright event starts tomorrow, October 15. The event will be available for nearly three weeks since it ends on November 5. The event will likely come through an update. It is currently unclear if the update will introduce other things that have been rumored in recent days, including the changes to the charging rifle and the addition of training mode.

What do you think about the upcoming event? Are you playing Apex Legends? Let us know in the comments.