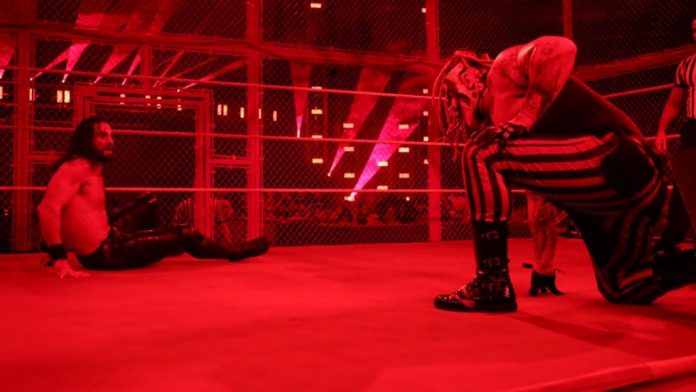 Fans in attendance for the WWE Hell in a Cell event were not so happy with the finish of the match between Bray Wyatt (The Fiend) and WWE Universal Champion Seth Rollins.

In recent weeks, Bray Wyatt’s new character, The Fiend, has caught the attention of the WWE universe and many expected him to take the WWE Universal Championship from Seth Rollins.

The event saw some title changes but many were there to see the result of the main event. For the match, WWE opted for a totally different finish, something that really angered the crowd. Seth Rollins delivered multiple finishers but could not put away Bray Wyatt.

Seth Rollins decided to grab a sledgehammer and use it. This then led to the ref calling for the bell, ending the match. The ref’s decision left the crowd confused since many thought it was a disqualification, something that is not part of the match since there is no DQ.

It was later said that the match ended over referee stoppage and not DQ. The confusing finish angered the crowd to the point in which they started chanting things such as refund and AEW, a new wrestling promotion that features superstars such as Kenny Omega, Cody and The Young Bucks.

The anger appears to come from the fact that Bray Wyatt has been nearly unstoppable since returning as The Fiend. His new character has attacked several legends and even Seth Rollins.

The recent segments and quick wins of Bray Wyatt made it seem like he would win the title at the event. But fans were not happy with the confusing finish, which leaves The Fiend out of the title picture.

This is not the first time that Bray Wyatt fails to capture a WWE title. The former leader of the Wyatt Family debuted in the main roster a while back. He went years without winning a WWE title. A few years back, he captured the WWE SmackDown tag team championships with the help of Harper and Orton.

The tag title run didn’t last very long and Orton would later become his main rival. Bray Wyatt did stun the crowd by winning the WWE Championship before Wrestlemania 32. But that title run also came to a quick end when Orton defeated him at Wrestlemania 32.

Bray Wyatt has had some success since returning to help Matt Hardy. The two won the WWE Raw tag team championships but that run wasn’t long either. Bray was away from the brand for a while before returning with The Fiend, a character that had won every match before the controversial main event on Sunday.

The next episodes of WWE Raw should give an indication on where WWE is planning to take The Fiend. Reports say the company will hold a draft soon, so this could provide a change of brand for The Fiend, who would be a nice opponent for Brock Lesnar. He recently captured the WWE Championship after a quick win against Kofi Kingston.