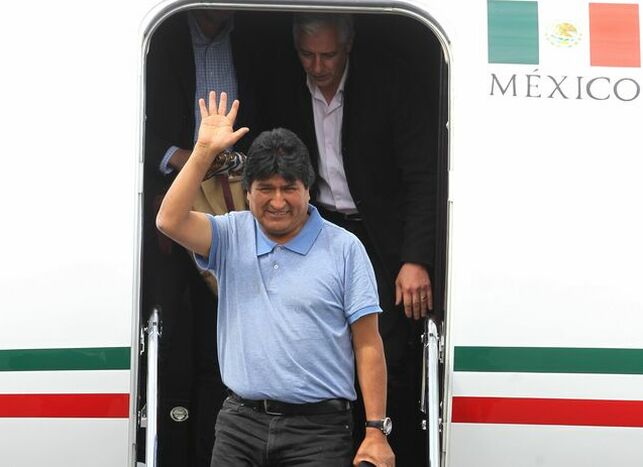 Bolivia’s interim president has ruled out the idea of Evo Morales returning to the country to participate in new elections. Morales, who stepped down as president of Bolivia on Sunday, is now in Mexico.

The former president was granted political asylum by the Mexican government. He arrived to the country on Tuesday and gave a brief news conference.

Bolivia’s interim president is Jeanine Añez, who took over the position after several officials resigned along with Morales. Mr. Morales has hinted at a return to Bolivia, where he was the president for three terms.

On Thursday, the interim president ruled out the idea of him returning to participate in the next elections. In her statement, she said Morales and his former vice president, who stepped down around the same time, could not be part of any new elections.

The interim president spoke to reporters and said that members of Morales’ political party would have the opportunity to choose a new representative.

Mr. Morales recently said he would be willing to return to Bolivia for a national dialogue. The comments from the former president drew a response from the interim president, who told reporters that Morales is breaking all protocols because he should not be publicly speaking.

The Mexican government has remained silent on the situation. Mexico welcomed the former president on Tuesday by granting him political asylum. Morales has thanked Mexico for taking him in and has said he was pressured by the armed forces to leave.

Morales left his position on Sunday after weeks of protests. The decision came shortly after the armed forces asked him to leave power. Earlier that day, several officials resigned.

Morales critics say he left power after seeing that he had lost all support. The protests had not stopped and reports say some police officers refused to take the streets. On Sunday, the situation got worse for the president as some officials left their positions. The armed forces then asked him to leave power.

The situation began last month when Morales participated in the presidential election. The results were announced and it was believed they were enough for a second round between the two candidates. Mr. Morales was then declared the winner for a fourth term.

The controversial election sparked the anger of some of the population. Mr. Morales had also sparked controversy by running for a fourth time.

A few countries have labeled the situation in Bolivia as a coup. One of them was Venezuela, which was a supporter of Morales since he became president in 2006.

On Thursday, Argentina’s next president, Alberto Fernandez, who will take office on December 10, said that he will offer political asylum to Morales and his former vice president. He said during a visit to Uruguay that it will be an honor to receive Morales and Alvaro Garcia Linera when he takes office.

Morales has not said if he plans to seek political asylum somewhere else but he has already said he is willing to return to Bolivia. Bolivia’s constitution says the interim president has 90 days to call for new elections.