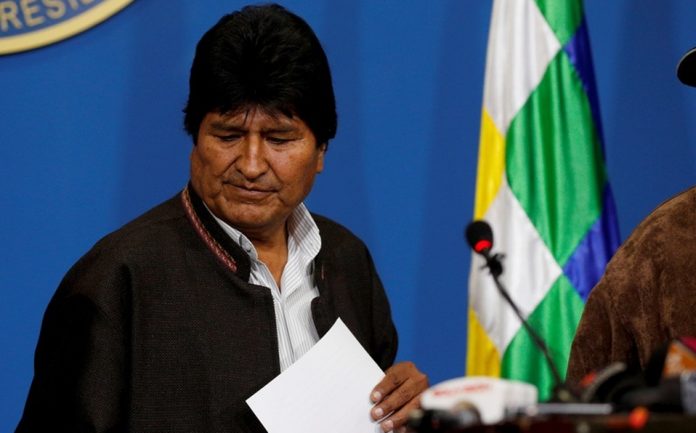 Incidents are being reported after the decision from Evo Morales to leave power. Tensions are currently high in the country over the announcement, which came after weeks of protests on the election.

On Sunday, Mr. Morales made a televised address, announcing that he would be stepping down. The announcement came shortly after the army called for him to step down. Before that, the army had announced that it would respect the population and not take the streets.

The BBC reports there have been incidents of looting since the announcement was made. In La Paz, several buses were set on fire after the resignation.

Mr. Morales was first elected in 2006 after he promised to fight poverty and fix many of the country’s problems. He participated in three presidential elections, winning all three of them. Controversy began when he went against term limits to run for a fourth term.

Mr. Morales participated in October’s election and was declared the winner. But the win was surrounded by doubts. The controversy continued when the result count saw a pause. The final result gave him enough to be the winner, despite the reports saying there would be a second stage.

Mr. Morales later agreed to replace the electoral authorities and hold new elections. But Carlos Mesa, who came in second in the recent presidential election, was not okay with the idea of him participating in a new vote.

Things continued to get worse for Morales, who saw the army call for him to step down. The pressure increased when some of his closest allies decided to step down. The leader of the senate has announced that she will be taking power. She became an option after several officials resigned.

Mr. Morales’ party still has control in the House of Deputies and Senate so it is currently unclear if she will get the support to be declared interim president. Bolivia’s constitution states the interim president has three months to call for new elections.

After his announcement, people took the streets to celebrate. In some cities, the celebration was joined by police officers, who had refused to leave their stations when the protests were taking place.

But in other areas, supporters of Mr. Morales took the streets to show their disapproval. In La Paz, there were reports of looting and buses being set on fire.

International allies of Morales have described this as a coup. One of them was Venezuela, which has been a supporter since the very beginning. Cuba and Nicaragua also made similar statements on the situation.

Unrest In Parts of Latin America

The unrest comes as Latin America is going through difficult times. Weeks back, Ecuador saw protests after the president took some measures that angered the population. The measures were reportedly made after Ecuador took a loan from the IMF.

Chile has also seen protests over the last few weeks. The protests began with students showing their disapproval for the increase of metro prices. But they continue, even after the decision from the government to suspend the increase and raise the minimum wage.