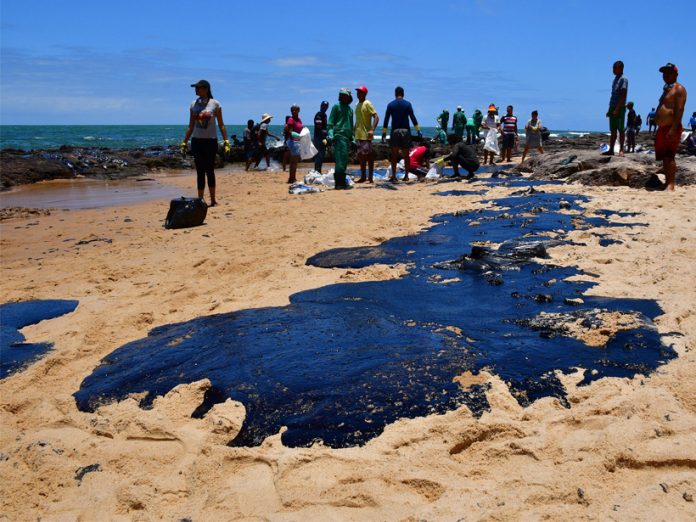 The oil spill that has spread across several Brazilian beaches is now suspected to be from a Greek ship. Brazilian authorities said on Friday that a Greek-flagged ship carrying Venezuelan oil was behind the oil spill.

Investigators did not give any details on the ship but a document obtained by Reuters identified the ship as the Bouboulina, which is owned by Delta Tankers Ltd. Authorities said the ship spilled the oil 400 miles off Brazil’s coast. The spill is said to have happened between July 28 and 29.

The ship was on its way to Singapore after picking up the oil from Venezuela. Brazil’s solicitor general said the country would seek damages. A statement released by prosecutors said there is evidence that the company, captain and the ship’s crew failed to tell authorities about the oil spill in the ocean.

The oil spill has spread to several beaches in the country. The government has deployed several groups to help with the cleanup efforts but officials said the disaster has been difficult to contain.

Tourism and Fishing Affected By the Spill

The oil spill has affected tourism and fishing in those areas. The country has cleaned up several areas but oil continues to appear in other beaches. More than 200 beaches are said to be affected.

Documents seen by Reuters also revealed that authorities carried out search warrants at Lachmann and Witt O’Briens, a subsidiary of Seacor Holdings Inc. There are little details on this but authorities said they both have commercial relationships with the company suspected of being behind the oil spill.

Not Caused By a Sinking Ship, Government Says

The information comes weeks after Brazil began hinting that neighboring Venezuela had something to do with the oil spill. Last month, a Brazilian official said that a foreign ship was behind the oil spill. The official said the origin of the oil could not be confirmed but added that the oil found had similar properties to the one from Venezuela.

Brazil’s environment minister said that a study done by Petrobras found that the oil was probably from its neighbor. A few weeks back, Brazil’s president denied rumors that the disaster was caused by a sinking ship. He instead hinted that another country was behind the oil spill, adding that it did not come from a Brazilian ship.

Venezuela’s oil ministry and PDVSA released a statement mentioning they knew nothing about the oil spill. The statement added that the company had not received any reports from subsidiaries or clients about an oil spill.

Venezuela and the companies seen by Reuters in the documents have not commented on the situation.