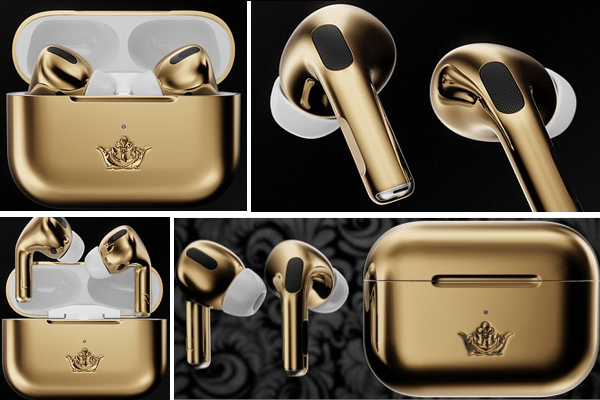 Russian luxury brand Caviar has announced some crazy expensive products, including several custom Apple iPhones, throughout the year. Now, the company has returned with another unique idea that is so rare that only one person will be able to purchase it.

The luxury brand has unveiled a pair of Apple AirPods that are wrapped in 18-karat gold. The Caviar AirPods Pro look exactly like the popular pair of wireless headphones sold by the smartphone giant. The only difference is that its case and the headphones are wrapped in gold.

Caviar has only made one edition so they are not only very expensive but also extremely rare. The price tag of these custom headphones is $67,000. Yes, you read that correctly, $67,000. This is a lot higher than some of the brand’s recent releases, which include several custom iPhones.

Recent Releases From the Luxury Brand

Caviar has gone all in when it comes to offering items that are extremely unique or expensive. Throughout the year, we’ve seen a number of eye catching releases. Just last month, the company announced several expensive iPhones.

The latest customized iPhones from Caviar are dedicated to some of the most famous personalities. The custom iPhone 11 Pro/Max series from Caviar include fragments from Muhammad Ali’s gloves, Beatles concert costumes, and Steve Jobs turtleneck.

The model dedicated to Steve Jobs imitates the design of the first iPhone. The phone has a signature of the Apple legend on the back. The phones have starting prices of $6,290, $11,990 and $9,650.

The announcement of the three phones came just days after the brand made headlines for releasing phones with fragments from the Titanic and the Vostok-1 spaceship. The two releases are very limited, with the company announcing that only a few units would be available.

The diamond version has a gold color so the custom AirPods from Caviar appear to have a similar theme going on. The company has not confirmed if this is part of a set or if this is just similarities. What we do know is that buying both of them will cost nearly $100,000.

If you’re not a fan of iPhones, the brand has also released a few custom phones from other companies. Earlier this year, the brand announced a Game of Thrones Galaxy Fold. This release came during Season 8 of the famous show.

The custom Galaxy Fold from Caviar turns the foldable device into a cover of a Game of Thrones book. The design is impressive but what’s most interesting is that the brand did all of this when the Galaxy Fold was not even out. The foldable device was delayed a month before Caviar’s announcement. At the time, there was no confirmation if the phone would be released this year.

Caviar announced that only seven units of the custom design would be made. A release date was not revealed at the time but the brand said there would be two other editions related to the famous show, which came to an end earlier this year after eight seasons.

At this rate, we’ll probably see a few other interesting custom products from Caviar before the year is over.