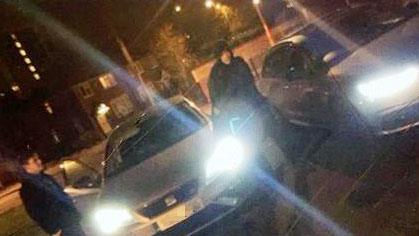 A group of thieves who were behind the theft of several luxury vehicles in Leeds were arrested after they took social media to show what they had. The group posted photos of themselves posing with the cars they had stolen.

The posts on social media ended up getting them arrested. West Yorkshire Police said the pictures were posted on an Instagram account called Mr Dingers. Authorities believe they were using the account to show the cars they had stolen.

Pictures of the Cars Posted On Social Media

One of the men arrested after authorities spotted the pictures was Frankie Allwork. He appeared in a picture posing in front of a stolen Audi A6. One of the pictures shows his face while the other shows all the faces, including the two people sitting in the car, covered with smiley faces.

Authorities also detained Bryn Kerry and James Holroyd. The two also appeared in images posing near the vehicles. The BBC reports that all have admitted to burglary or car theft charges at the Leeds Crown Court.

Authorities said the images were important to the case since they provided evidence in the investigation of the thefts. The group stole several luxury vehicles, including the Audi A6 and the Seat Leon FR seen in the pictures.

Authorities did not have their identities right away since one of the pictures posted on the Instagram account was covered with smiley faces. Police were able to confirm the picture when they checked his phone and found the unedited version. That version shows him in front of the car as well as two others sitting inside the car.

The Audi A6 seen in the picture was stolen from a house on January 7. The BBC reports that the group posted a video of the tools they used and driving the vehicle.

The Seat Leon FR seen in a different picture was stolen on the same night as the Audi. The image shows two people standing next to the two cars.

All Three Given Sentences

Allwork was given a sentence of four years and six months. He will serve that in a young offenders institute. Kerry was sentenced to 32 months while Holroyd got 34 months. Allwork admitted his involvement in another burglary where a Mercedes vehicle was stolen. That theft is said to have happened in January.

The gang from Long Beach reportedly stole more than one million worth of gold bars, watches and jewelry. Police were having a difficult time on their investigation since the robbers never left behind a single fingerprint or trace of DNA. But it all changed when authorities spotted the pictures of them showing off money and other items. The posts led to the arrests of several members of the gang.