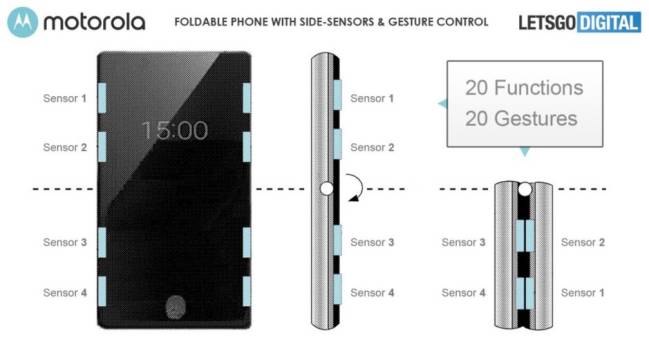 The new edition of the Motorola Razr is not even out yet but there are already reports of a second phone. The upcoming release will be among the most affordable foldable phone options when it goes up for pre-orders in a few weeks. But Motorola appears to be wasting no time in a second version, which could have a few changes and extra features.

A patent spotted by LetsGoDigital shows a phone that looks similar to the new Razr but with a few changes and extra features. One of the most noticeable things is that there is a fingerprint icon on the screen. There is really no information on the icon but this suggests that a fingerprint scanner will be built into the display.

The patent does give a lot of indications on the sensors of the rumored phone. The image shows eight sensors at the edges of the phone, four on each side of it.

TechRadar reports that these can be used as customizable buttons when the screen is folded or unfolded. On top of that, the sensors can also respond to gestures. This makes a lot of sense since Motorola phones in the past have used gestures to start the camera or any other feature of the phone.

TechRadar also points out that the image of the phone lacks the chin. The upcoming Razr phone has a chin, just like the version released nearly 15 years ago. This image doesn’t show one, meaning the phone will be a bit different.

The patent doesn’t mean that the phone is coming in the near future. This is simply an idea that the company is interested in. The image is quite interesting since the company has yet to release its first foldable phone.

The new Motorola Razr was announced just days ago, finally bringing an end to the rumors that went around for years. The Razr will be returning but in a much different design, even if it keeps some of the looks from the 2005 release.

The old and new Razr may look similar when folded but the new version is completely different from Motorola’s successful release. The new Razr is equipped with foldable technology and while it folds differently, the device will still be competing with other giants such as the Galaxy Fold and Mate X.

The new Motorola Razr has a price of $1,499, which is much lower when compared to the Galaxy Fold and Mate X. According to reports, the phone will be a Verizon exclusive and will use a digital eSIM card, which could mean no unlocked releases.

The Motorola Razr will be available for pre-order starting December 26. The foldable phone will be released in January 2020.

Which foldable phone are you most interested in? What do you think about the image from the patent? Let us know in the comments.