NFL Week 11 is nearly done but there is plenty to talk about. Several teams made a huge push towards a playoff spot while others got into a complicated situation. Here are the results and much more on Week 11:

Thursday Night Football saw a matchup between two division rivals. The Browns struck early but the game remained close, despite the turnovers by Rudolph. With just seconds left in the clock, Rudolph and Garrett got into a fight that ended up with the Browns star taking his helmet away and hitting the Steelers QB in the head.

Garrett has been suspended indefinitely by the NFL while Steelers players involved in the incident also received a suspension and fines.

The Jets dominated for most of this game, having big plays on offense and defense. Jamal Adams was the star of the defense with three sacks.

Nick Foles returned but the Jaguars offense and defense struggled to keep up with the Colts, who also got their QB back. The win was huge for the Colts since it puts them in first in the AFC South.

The Bills bounced back from two straight losses by defeating the Dolphins. Miami had won two straight but the Bills defense held their opponents to zero points in the first and third quarters. 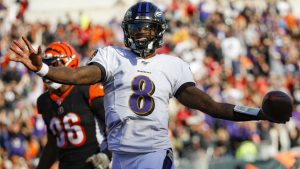 This match was far from close as the Ravens offense continued showing why it is one of the strongest in the NFL. The Texans didn’t score until late in the game.

The Lions took the lead early in the game but the Cowboys offense made several big plays to get back in and later take the lead. Dak threw for over 400 and two of his receives went for more than 100.

The Falcons had another impressive game, this time against the Panthers. Last week, Atlanta shut down the Saints offense and on Sunday, it did the same to the Panthers. Carolina has now lost two straight games.

The Saints bounced back from last week’s shocking loss by scoring 34 on the Buccaneers. Tampa Bay made things close but New Orleans pulled away to secure the win.

The division rivals played a very entertaining game. The match was close but the 49ers were able to pull away and continue their great run towards the number one seed in the NFC.

The Broncos held a 17 – 0 lead in the third but the Vikings fought back and ended up taking the W. Minnesota has now won two straight putting them half a game back from the Packers.

The Raiders continue to win behind the running from Jacobs. This time, the win came against the team with the worst record in the NFL, the Bengals.

This game was nowhere near the offense party both teams had during Super Bowl 52. Brady had a career high in incompletions in the first half but Wentz and his offense also struggled. The Eagles took a 10 point lead early but those would end up being the only points of the night as the offense struggled to keep up with the Patriots.

A close match throughout most of the game as both QBs struggled. Both teams had less than 200 yards passing but the Rams running game responded with over 100 yards. The loss drops the Bears even more in the NFC North after a win by the Vikings.