WWE Survivor Series (2019) kicked off yesterday with not only SmackDown and Raw competing but NXT also joining the mix. The three brands competed but there was only one that dominated. Here are the Survivor Series results and much more:

The battle of the women’s champions went to NXT. Shayna Baszler pulled off the huge win against SmackDown Women’s Champion Bayley and Raw Women’s Champion Becky Lynch. Her win was one of several that her brand had during the event.

Team SmackDown got on the scoreboard after a big match against Team NXT and Team Raw. The sole survivor of the match was Roman Reigns. This was the only win for Team SmackDown.

Team NXT was able to secure a huge win against Team SmackDown and Team Raw. Team NXT had three survivors in the match, giving them a solid victory at the event. This was one of several big wins for the brand, which came in strong after numerous appearances on Raw and SmackDown in the last few weeks.

Brock Lesnar defeated Rey Mysterio, who got the help of his son during the match. In recent weeks, Lesnar had attacked the two, sparking a feud. Mysterio put up some offense against Lesnar but the WWE Champion was simply too strong. 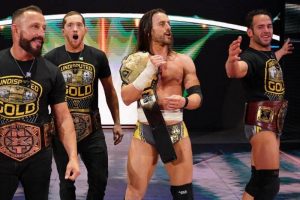 Adam Cole was one of two wins that the Undisputed Era had during the event. The win came against a tough opponent, Pete Dunne. Adam Cole and his team had participated in the NXT TakeOver: WarGames the night before so this is a huge victory coming off almost no rest.

Dolph Ziggler and Robert Roode won a tag team battle royal at Survivor Series. The match was part of the kickoff show. Does this win mean a tag team title opportunity for them? Roode and Ziggler held the WWE Raw tag team titles not too long ago.

The Viking Raiders pulled off a huge victory against two of the hottest tag teams in WWE. They not only defeated The New Day, who have dominated the tag team division over the last three years, but also Undisputed Era, who hold most of the NXT championships, including the North American Championship.

Lio Rush defeated two former Cruiserweight Champions at the event. Rush won the title last month after returning to NXT the month before.

What did you think of the event? Were you surprised by any of the results? Let us know in the comments.