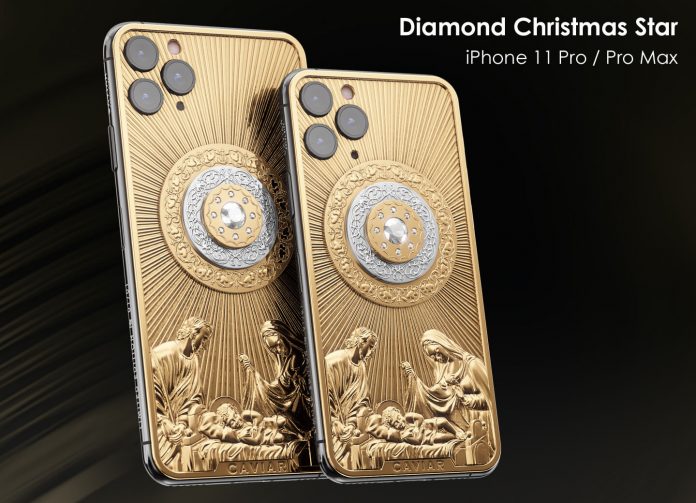 Russian luxury brand Caviar has returned with another pricey Apple iPhone. This time, the brand has taken things to a whole new level by selling iPhones for more than $100,000.

The brand has introduced the Christmas Star collection, which features three Apple iPhones. The phones easily stand out from the rest as they are decorated with several diamonds. The main attraction is the large stone surrounded by eight little diamonds.

The phone’s design is quite interesting but the device is far from affordable. Apple iPhones are already pricey but this one is for someone who has lots of money to spend. Oh and we forgot about the rest of the design, which also features other valuable pieces of jewelry.

The lower half of the phone is decorated with a gold carving that illustrates Jesus Christ’s birth. There are three models in the Christmas Star collection, one with the diamond, another with a silver carving and one without the diamond.

Caviar gave a brief description on its latest release but the brand did not say how many units will be available. In previous releases, the company has only released a few units so we think these iPhones will also be sold in limited numbers.

The Christmas Star collection is easily one of the most expensive editions released by the brand in 2019. One of the phones starts at $129,080, which is an insane price for a custom iPhone. The model without the diamond is a bit cheaper but still way more than any phone out there.

Caviar has been busy during the year, releasing many custom iPhones, accessories and other custom smartphones. The brand appears to have stepped up the luxury for this year’s releases. Some of the devices are extremely unique and expensive.

One of the most talked about devices were the two iPhones featuring fragments of the Titanic and the Vostok-1 spacecraft. The brand only offered a few units but the prices weren’t as high as the Christmas Star collection.

Just a few days ago, the brand was in the news when it was announced that it had released a gold pair of Apple AirPods. The Apple accessory has a very high price and reports said only one unit would be available.

The brand also focused on other smartphones throughout the year. During Game of Thrones Season 8, the brand announced a Game of Thrones Galaxy Fold. The custom Samsung Galaxy Fold turned the device into the cover of a GoT book. It was said at the time that there would be a limited release for this edition.

The brand announced the custom foldable device when it had already been delayed. The Galaxy Fold was scheduled to make its debut earlier this year but the company was forced to make changes after some issues were found with the technology.

The Galaxy Fold was released just a few months ago but that didn’t stop the Russian brand from coming up with a design during the wait. In recent years, the company has also released other custom phones, including a Nokia and an iPhone X with a solar panel.

2019 is just weeks away from ending but at this rate, we wouldn’t be surprised to see the brand release another insanely expensive device before the year is over.