Champions League Round of 16 Draw: All the Matches 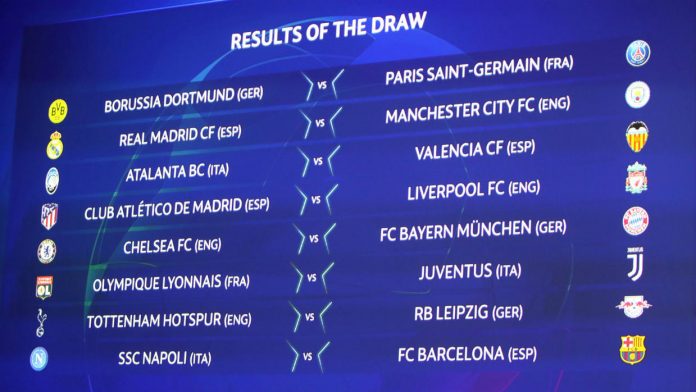 The Champions League Round of 16 Draw took place just a few hours ago and it did not disappoint. The draw has ended with big matchups, including two between Spain and England. Here is everything you need to know about the UCL Round of 16 draw:

Borussia Dortmund fought until the very end in the group stage but the road to the final is off to a difficult start with PSG now as their next opponent. PSG ended the group stage with five wins in six matches. What’s more impressive is the goal difference, which ended 17 to 2.

The Champions League winners will begin their title defense with a tough opponent in Atletico Madrid. The Spanish club has made two finals appearances in recent years and while they have failed to win one, they always prove to be strong defenders and difficult to beat.

One of the big matchups of the Round of 16 is Manchester City vs. Real Madrid. The current Premier League winners will go up against Real Madrid, a team that recently won four UCL titles in a span of five years. Real Madrid and Man City did meet a few years back in a game that was decided by a Bale goal.

Atalanta became the only team in history to lose the first three matches and go on to qualify. They will meet Valencia, a team that beat out Chelsea for first place in Group H.

Barcelona will face Napoli in what could be a very interesting match. The Spanish club has not had an easy time against Italian clubs in recent years. Napoli ended the group stage one point behind Liverpool.

Tottenham made it all the way to the final last year but things are a bit different now. The club ended way behind first place and it has a new manager in Jose Mourinho. Leipzig was part of a close group with first and last separated by just four points but it should be an interesting match since both clubs have had big performances recently.

Lyon barely made it to the Round of 16 after finishing one point ahead of Benfica and Zenit. The French club does not have an easy task ahead as they will face Ronaldo’s Juventus. The Italian club fell short last season but it was nearly perfect during this campaign’s group stage with 16 points out of a possible 18.

This is a rematch of the UCL final years back. The rosters are much different but it will still be an interesting match as both are big clubs that have won it all in recent years. Bayern were perfect during the group stage with 18 points while Chelsea barely made it by with 11 points.

What do you think about the Round of 16 matchups? Who do you have winning it all? Let us know in the comments.