Chile: Police Say They Have More Suspects Involved In Destruction of Metro Stations 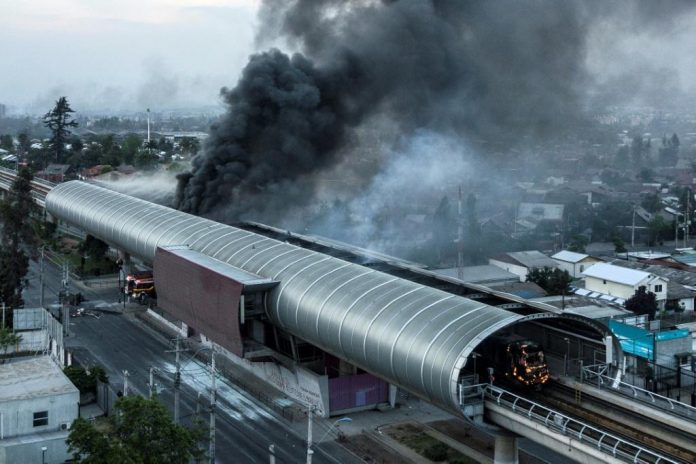 Chilean authorities say they have identified 14 suspects believed to have been involved in the destruction of several Santiago Metro stations. 24 Horas Instagram account reported earlier today that authorities had identified the suspects during an investigation held by a team from PDI.

The news agency reports that one of the officials from the investigation team said that it had to reorganize its working ways to investigate the attacks that Santiago Metro stations suffered.

The investigation has led to the arrest of six people but authorities say they have identified 14 others. Authorities said they are planning to take action once they have the evidence. According to the news agency, the PDI team has used pictures posted on social media and images of the places that were vandalized during the protests last month.

The official involved in the investigation added that they have found that there is a previous organization to the incidents. He explained that they have determined that fans from sports clubs and students arrived to the Pedrero Station fully organized. During the incidents, crowds evaded and damaged some of Santiago’s Metro stations.

The incidents began last month when the government introduced a price hike for Santiago Metro. The move sparked protests from the students, especially those who use public transportation to get to schools and universities around Santiago. The price hike was later suspended by the government. The protests have also sparked a number of changes and proposals, including the plans to raise the minimum salary and pensions.

The protests later turned into clashes and incidents at some of the busiest stations across the capital. The incidents continued for days and some of the stations were completely shut down.

It Could Take a While

The damages are said to be in the millions and reports have recently said that it could take a while before the entire Metro system is back to 100 percent. Some metro stations in the capital suffered minor damages while others were completely destroyed. Local media reports that some stations could be closed until late 2020.

Hundreds of businesses were looted in the capital and other cities when the unrest began. Many people were arrested on the spot but authorities have also gone after people identified in the videos.

Currently Operating In the Capital