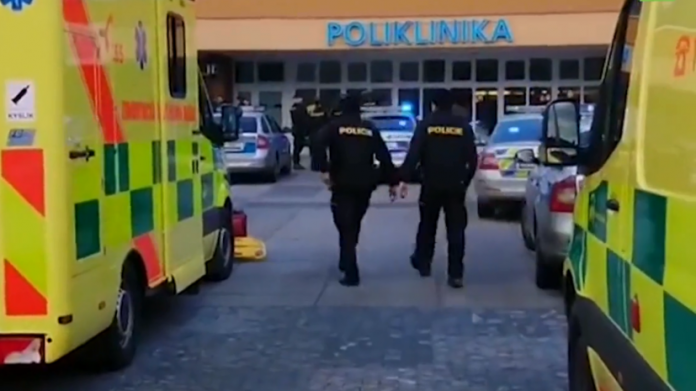 A gunman has killed six people who were in the waiting room area of a hospital in the city of Ostrava. Authorities say the gunman fled and later shot himself in the head.

One report says the gunman was a patient at the hospital. The reports have not been confirmed but police say they were called to the hospital at 7:19. The director of the hospital Jiri Havrlant told local media that the gunman opened fire without any warnings. Nine patients were hit by the fire.

All of the people that lost their lives in the attack were patients at the hospital, according to reports. Two women and four men died in the attack. Two people are said to be seriously injured.

Police said the gunman used a handgun during the attack. He then fled the hospital, driving off in a silver Renault Laguna car. Police had already identified the suspect before he was found. They had his name, photos, and the license plate number of the car.

Reports say the suspect did not have a license for the gun. While on the run, authorities obtained a few pictures of him from two helicopters. The helicopters were in the area to search for the man, who disappeared after the attack.

One of the helicopters identified the car around three miles away from the hospital. The man shot himself in the head shortly after he was spotted.

Authorities initially asked for help in their search for the suspect. They warned people not to get close to him and confirmed that the hospital had been secured. The hospital was evacuated by emergency services.

BBC reports that colleagues of the suspected gunman told local media that he had recently been on sick leave. He was being treated at the hospital where he killed the six people. It is unclear if he knew any of them.

At The Scene Within Five Minutes

Authorities said that the police officers that responded to the shooting arrived to the scene within five minutes. Pictures taken by news agencies some time after show several patients and staff members being evacuated. It is unclear how many people were in the hospital at the time of the attack.

Prime Minister Andrej Babis confirmed the reports of the deaths of the six people. He explained that the shootings happened at close range. He revealed that the gunman visited his mother after the attack and told her what he had done.

The governor recently spoke about the attack, saying it was a great tragedy. Reports say the Prime Minister has cancelled a trip to travel to the city.

Shootings such as the one on Tuesday are not common in the country. One of the most recent shootings took place in 2015, when a man opened fire at a restaurant in the town of Uhersky Brod. The attack left eight people dead and the gunman took his life after a standoff with police that lasted almost two hours.