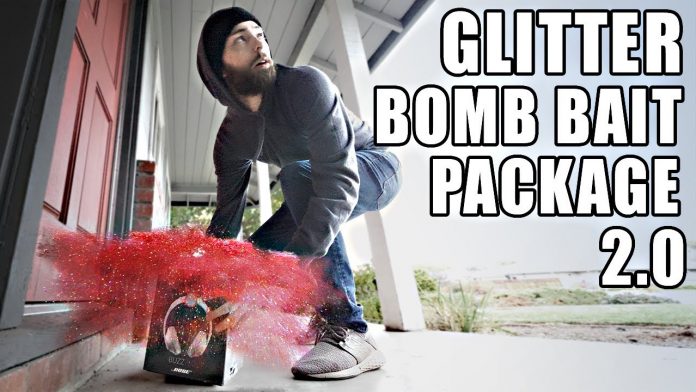 YouTuber and former NASA engineer Mark Rober has gone viral once again. This time, it is over another video showing how he stops package thieves. Last year, he built an exploding glitter bomb. The first video went viral during Christmas 2018 and he is back with an improved version.

The idea came up when he started thinking of ways to stop package thieves, who come up to a person’s house and take anything that has been delivered to their front door. Package thefts have become a major problem over the last few years since more and more people are shopping online.

Online retailers such as Amazon have come up with ways to reduce thefts, including a program that allows delivery people to enter the home and leave the package inside. The idea hasn’t been well received by some since not all people like the part where a random delivery guy can step inside their home. But the Amazon Key service has been around for some time now.

Many people are still having their packages delivered to their front doors so Mark Rober has come up with an improved idea that will definitely keep thieves away or at least surprise them.

The new video currently has more than 16 million views. Mr. Rober says in the video that he literally spent the last ten months designing, building and testing a new and improved design for 2019.

Authorities have been coming up with ways to reduce package thefts. But they are difficult to reduce since many packages are delivered every day. The BBC reports than an estimated 23 million Americans have had a package stolen from their property at some point.

The former NASA engineer came up with the first idea after he had a package stolen from his porch. The first video quickly went viral since it brought a little surprise for those were seen taking packages. The video currently has more than 70 million views but it had to be edited after it was discovered that several victims were known by one of the volunteers who placed the packages.

The creation from Mark Rober triggers a glitter explosion when opened. The surprise also comes with a really bad smell. The new and improved version has a much stronger smell and police sounds to scare the thief or thieves. Once touched, the package explodes and catches the thief by surprise with the sounds and the smell. The whole thing is captured on video.

Mr. Rober’s new video appears to be on its way to bigger success than the first version since it already has over 16 million views in just two days. Other victims appear to be taking similar steps to prevent thefts from happening. Around the same time last year, WCVB Channel 5 Boston reported about a woman who went online and ordered a glitter bomb. She had ten packages stolen before deciding to surprise the thief. Someone actually took the package and left a trail of glitter but police did not make any arrests.