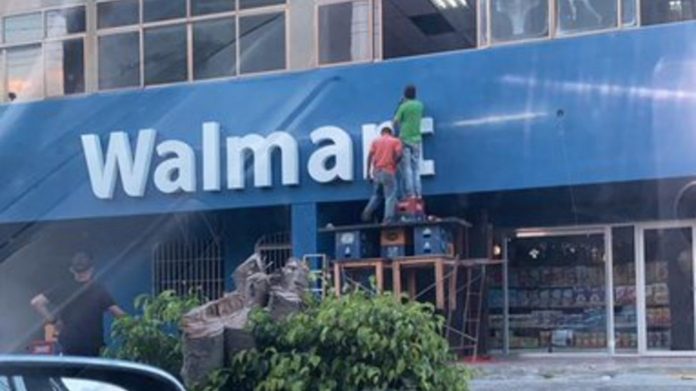 A Walmart has opened in Puerto Cabello, Venezuela but the famous chain is not involved. Over the last few days, residents have posted pictures and wondered if the chain is actually coming to the South American nation.

It has been confirmed that the US company is not involved in the store opening. The owners of the store don’t seem to care about using the logo and name of the US giant. The store in Puerto Cabello looks exactly like a small Walmart.

The front of the store has the famous colors, name and logo. Residents began wondering what it was about when the name was being installed at the top of the building.

In just a few hours, the owner and store were all over local news. The opening seemed a little strange since the US has broken all diplomatic ties with Venezuela, recently sanctioning the country and preventing them from doing business with US companies.

Not a Real Walmart, Owner Speaks

After it was confirmed that the real Walmart had nothing to do with that store, local media contacted the owner. In the interview, the owner talks about the creativity of Venezuelans and what led to the opening of the store with a name and logo that is famous somewhere else.

Some Venezuelans aren’t happy with his comments and have criticized his thoughts on creativity. On social media, several users highlighted that the store is selling items at much higher prices.

One local media report pointed out that the store is selling a doll, that is found on Amazon for around $9.99, for $50. In the interview, the store is full of common US cereals and other products. Imported products are common in the country but they are usually sold for US dollars or at way higher prices.

Local media also reports that the man behind the store was working for a public entity before he made the controversial move. Walmart has not released a statement on the controversial opening of the fake store.

The US giant has stores in other parts of Latin America, including Chile and Mexico. But it has never opened stores in Venezuela, where companies are actually leaving over the economic and political crisis.

A real opening there also looks very unlikely as the sanctions from the US prevent US companies from doing business with the country. The only way Adobe and the local baseball league continue doing business there is because the US has granted them an exemption.

Not the First Time

This is not the first time that there is controversy over the use of a logo or name from a US company in Venezuela. In early 2018, the Venezuelan government seized a Kellogg cereal factory. The factory had been closed by the company due to the situation in the country but the government decided to reopen the factory and continue production. The products from the famous cereal company are now mostly found by stores and companies who work on importing products.