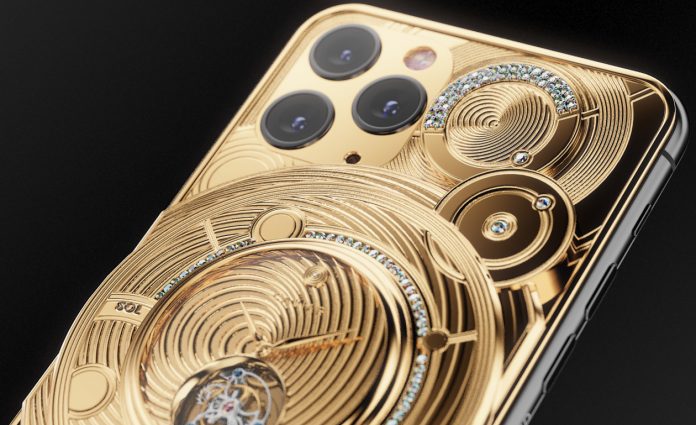 Russian luxury brand is back once again with another super expensive custom smartphone. In recent weeks, the brand has unveiled some impressive designs and this one is no different. The latest releases are the Solarius Zenith Full Gold phones.

The custom phone is a regular iPhone 11 Pro that had the back panel replaced with more expensive material. The back is not just made out of gold and diamonds, the company also took its time to add an impressive clock. The fancy clock is one of the things that make this phone unique and very expensive.

The phone starts at a whopping $100,000, making it one of the most expensive editions released by the brand. Things get even more expensive if you think the standard edition doesn’t have enough storage. The custom iPhone 11 Pro Max or other editions with more than 64GB of storage cost $20,000 more.

Caviar often makes limited releases so this probably won’t be any different. The brand didn’t reveal how many units will be available but it wouldn’t be surprising if there is less than ten in total.

The latest announcement from Caviar is easily one of the most expensive of 2019. The brand had already shocked the tech world by announcing crazy expensive custom smartphones and accessories throughout the year. Less than two weeks before the Solarius Zenith Full Gold phones were announced, the brand unveiled another set of expensive iPhones.

The custom iPhones actually have a similar price to the latest releases and they feature a gold carving along with several diamonds on the back. The brand also took its time to create a version with silver carving, which is still a lot more expensive than a regular Apple device.

Before all of this, the brand focused on some creations for those who want to have matching phones and accessories. At the time, the brand announced a pair of Gold Apple AirPods. The accessory is not only super expensive but also extremely rare since it was announced that only one unit would be available.

The brand is known for its luxurious creations but things went to a whole new level this year. During the whole Game of Thrones Season 8 craze, the brand announced a custom Samsung Galaxy Fold. The foldable phone was given the look of a GoT book by Caviar. Like the majority of Caviar’s releases, the phone was offered for a super high price tag.

The craziest part about the Game of Thrones Galaxy Fold was that the foldable phone had been delayed. No one had the phone since the company suspended everything due to some issues found with the technology. But Caviar still took its time to come up with a custom edition for fans of the series.

They were far from done after the announcement of the GoT Galaxy Fold. The brand later announced an iPhone with fragments of the Titanic and a historic spacecraft. All three custom phones were said to be limited releases, meaning the brand would only be making a few of them.